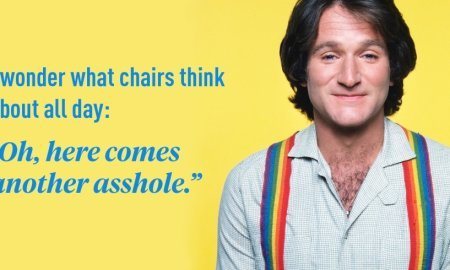 We’re still in shock over the recent death of legendary actor/comedian, Robin Williams. Recently, many have been paying tribute to the late star and we want to memorialize him as well. He was a talented actor and amazing comedian. So let’s take a look back at the 10 times Robin Williams made us smile.

In Steven Speilberg’s 1991 classic, Hook, Williams played an adult Peter Pan who needed to return to Neverland to save the “Lost Boys” from the evil pirate. Williams’ charisma and humor made the picture a classic. Here’s one of his best quotes from the movie – “To live would be an awfully big adventure.”

Good Morning Vietnam is a 1987 American war comedy in which Williams plays a radio DJ who gains huge popularity with the troops for lightening the mood while they are at war in Saigon. Not surprisingly, many of Williams scenes were improvised. One of our favorite quotes from the movie – “It’s gonna be hot and wet! That’s nice if you’re with a lady, but it ain’t no good if you’re in the jungle.”

In the 1998 film, Williams played a medial student who treated patients illegally with humor. One of the best quotes from Williams in film – “You treat a disease, you win, you lose. You treat a person, I guarantee you, you’ll win, no matter what the outcome.”

In the 1995, adventure film, two kids discover a magical board game that releases a man who’s been trapped for 26 years and the only way to overcome all the dangers thrown their way is to finish the game! Here’s a quote from the movie -“What, are you crying? You don’t cry, all right? You keep your chin up. Come on, keep your chin up. Crying never helped anybody do anything, okay? You have a problem, you face it like a man.”

In the 1992 Disney classic, Aladdin, Williams plays the voice for the Genie who grants the street urchin his three wishes. One of the best lines of the film is “No matter what anybody says, you’ll always be a prince to me.”

In the 1996 comedy, Williams played a boy with an aging disorder who had to enter the 5th grade looking like a 40 year old man. Here’s a great line from the movie -“Please, don’t worry so much. Because in the end, none of us have very long on this Earth. Life is fleeting.”

Robin played a homeless man who’s world had been turned up side down by a radio DJ. One of the best quotes from the film was -“There’s three things in this world that you need: Respect for all kinds of life, a nice bowel movement on a regular basis, and a navy blazer.”’

Williams played John Keating, a radical English teacher at an all boys school who taught his students to love poetry and love life. Here’s an inspiring quote from the film -“Carpe diem. Seize the day, boys! Make your lives extraordinary!”

Williams takes on a dramatic role in the Oscar winning film. He stars as a psychologist who helps a janitor at M.I.T. discover his meaning in life. A great quote from the movie is – “Real loss is only possible when you love something more than you love yourself.”

Possibly one of the most memorable roles Williams played was in Mrs. Doubtfire. In the film he played a nanny to his own children after his wife had received custody of them. One of the best quotes of the film:

“Dear Mrs. Doubtfire, two months ago, my mom and dad decided to separate. Now they live in different houses. My brother Andrew says that we aren’t to be a family anymore. Is this true? Did I lose my family? Is there anything I can do to get my parents back together? Sincerely, Katie McCormick.” Oh, my dear Katie. You know, some parents, when they’re angry, they get along much better when they don’t live together. They don’t fight all the time, and they can become better people, and much better mummies and daddies for you. And sometimes they get back together. And sometimes they don’t, dear. And if they don’t, don’t blame yourself. Just because they don’t love each other anymore, doesn’t mean that they don’t love you. There are all sorts of different families, Katie. Some families have one mommy, some families have one daddy, or two families. And some children live with their uncle or aunt. Some live with their grandparents, and some children live with foster parents. And some live in separate homes, in separate neighborhoods, in different areas of the country – and they may not see each other for days, or weeks, months… even years at a time. But if there’s love, dear… those are the ties that bind, and you’ll have a family in your heart, forever. All my love to you, poppet, you’re going to be all right… bye-bye.