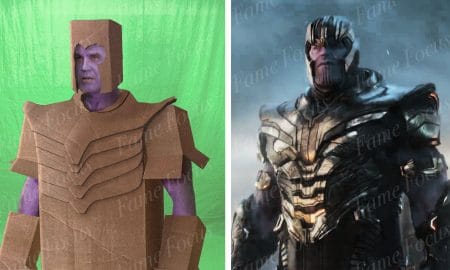 Racking up a total of 7 sequences comprising of 337 VFX shots, Digital Domain was one of the many VFX companies responsible for making Avengers Endgame, that looked like this, to look like this!

For the scenes where we see Thanos on his retirement planet, Digital Domain did an amazing job of bringing this artificial environment to life but it didn’t come easily.

A completely photoreal alien planet had to be created without it looking too much like Earth. They had to create alien plants and also the fruit that we see Thanos picking which is a mix of Guava, Artichoke, Kiwi and Kiwano, also known as ‘horned melon’.

Time was spent getting the lighting on the plants to look just right, with plenty of subsurface scattering, making sure they looked nicely backlit by the sun. Atmospheric elements like dust particles were added in comp as well as some good old’ God rays, otherwise known as volumetric lighting.

But this low angled sunlight shining through the many layers of animated alien plantlife took a lot to render. Renders would use nearly all of their render farm, taking a whole weekend to complete.
Aside from some alternative versions like Damaged Nebula and a clean Hulkbuster, Digital Domain recycled most of the CG characters they used in Infinity War for Endgame, with the exception of War Machine who was actually new to them.
Both War Machine and Hulkbuster’s models were shared assets from another company.

Thanos had some minor upgrades since Infinity War. More resolution was added to the Thanos model and textures. Additional controls were added to the rig, including the face, to allow for more detailed facial performances, such as partial facial paralysis, for example.

In order to make his face look and move like it had suffered the wrath of using all the infinity stones at once, so extra controls around the mouth were added in order to improve the realism of muscles not quite contracting the way they should.

For the scene where Nebula fights Nebula, it was shot in a way that didn’t really show both faces at the same time. Which made it much easier as it meant that there wasn’t much Digi-double work to do, leaving them with just the other tasks, such as; replacing future Nebula’s arm, makeup and costume touchups, eye replacements and adding the orangy stripe to her head.

Shooting this scene on a green screen soundstage actually made it more difficult for Digital Domain due to them having to make an entire digital set, matching the already established lighting on the actors that could also hold up to close-up shots.
To save on time, due to deadlines, they reused parts from other sets that they had previously created, adding additional textures and more resolution.

Thankfully, they were given quite a bit of freedom when creating the set which allowed them to insert lighting to match the already established lighting, baked onto the actors.

For the holograms in the scene where Thanos finds out about the future, they already had a nice about of the animation work already done, like the scene where Thanos loses his head, literally…
What they did do was to film the same scenes but from the perspective of Nebula and then create the 3D holograms but in the perspective of the audience. After that, once achieving the right hologram style for the shots, it was then applied in 2D.