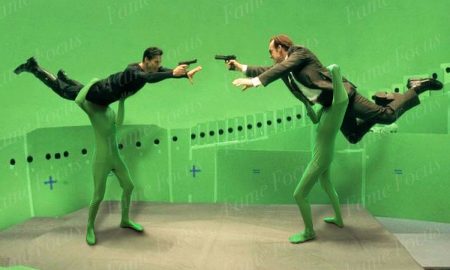 Home Alone may not really stand out as a movie that would require many, if at all any, special FX but there were actually quite a few dotted about in places you wouldn’t have expected them to be.
As, aside from using potato flakes and a fan to simulate snow, most of the special effects were for safety reasons like, for example, using this rubber chair to softly squash Fuller’s face up against the wall.

The special effects in Home Alone also helped to protect actor Daniel Stern’s feet. “Whaa…?” …You ask?
Well, for the scene where he loses his shoes and socks and ends up standing on a nail, this was luckily only a soft rubber nail that didn’t hurt a bit. Or when you see him running barefoot outside in the snow outside, thankfully he had a cosy pair of fake rubber feet to wear as you can see here.
And when he comes in through the window and plonks his feet down on a bunch of glass ornaments, they were made out of special sugar glass that is designed to break easily and not cut. It still must have hurt though…

However, it wasn’t just Stern’s feet that were protected by effects, they also protected his face. I mean, shooting a BB gun point-blank at someone’s face is kinda crazy dangerous.
So instead they paid a guy called Kevin Nordine who had a studio in his parent’s basement, to some VFX, like all of the VFX; for the entire movie!
Yep, this one guy, charging up to around 600 dollars depending on the shot, working out of his parent’s basement in Chicago was responsible for all the VFX in Home Alone. From superimposing Kevin’s family members onto this shot to making Harry’s tooth shine and, of course, adding this ball bearing that allowed Daniel Stern to do this shot without actually getting shot.
This was done by hand painting the ball bearing right onto the film, frame by frame. Which actually looks pretty awesome!

But, perhaps, the only scene where Stern’s face wasn’t quite protected by SFX, other than standing under a 300-pound camera falling toward his face, was where the tarantula gets put on his face. That sucker was 100% real!

And, while special effects mostly kept Stern from getting injured, many of actor Joe Pesci’s booby-trap scenes relied on stunt doubles to keep him safe.
However, forgetting about those shots for a moment, there is one memorable scene where Pesci was, thankfully, protected by some clever camera trickery as, for this scene, they needed to blowtorch his head.

They achieved this by using a technique called “Pepper’s Ghost” which is actually quite an old camera trick.

But this mask is black instead and works because the camera will only see a reflection when there is enough light bouncing off the glass. So anything that is black isn’t giving off enough light and thus invisible to the camera. Therefore, when the blowtorch fires, the flame is the only source of light hitting the glass, reflecting off it into the camera lens. So, when Joe Pesci stands in just the right spot, the reflection of the flame lines up and even looks like it’s moulding around his head thanks to the shape of the black mannequin’s head.
All you need then is to add some additional flickering light to Pesci to simulate the light coming off the fire and you’ve got a pretty convincing special FX shot.

The only problem is, if you look carefully you can see some additional spill of light on the curtains behind the blowtorch being reflected onto the glass. You can also see the edges of the mannequin’s head outline where Pesci’s face isn’t quite lined up. But, despite all that, it still looks pretty convincing.

Or listen on Spotify: