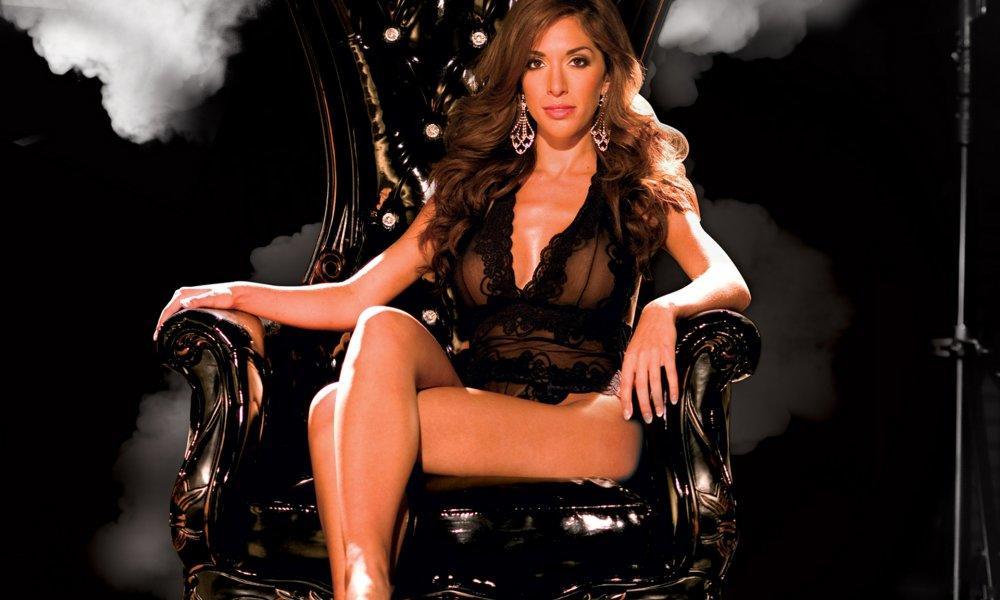 Farrah Abraham has been a controversial personality in the media since first appearing on MTV’s reality show 16 and Pregnant, which was then followed by her joining the cast of Teen Mom, its spin-off Teen Mom OG and UK’s Celebrity Big Brother. She’s only 25, but she has already racked up more than her fair share of tawdry tabloid drama to last several lifetimes. In fact, she believes she has surpassed Kim Kardashian in terms of fame (as if that’s a good thing). She has been criticized not only for her own life choices, but also for her mothering skills. Here are some shocking secrets, juicy scandals and little known facts about the trainwreck of a reality star who can’t seem to get enough attention.

2. She claims she was drugged and raped

3. She struggled with postpartum depression

After Farrah gave birth to her daughter Sophia she said she suffered from extreme postpartum depression and thought of suicide. She has said: “I figured I’d drown myself in the bathtub—that seemed like the easiest way to go.”

5. Her daughter’s father died in a car accident

Farrah first got pregnant as a teen and was not in contact with Derek Underwood, the child’s father, when he died in a car accident. She was eight months pregnant at the time. Her parents told her to keep the pregnancy a secret and not to grieve or talk about her feelings during the ordeal. She said in her memoir, “He was my first love, my only true love.” She says of her teen pregnancy, “I would do it all again,” she says. “(Daughter Sophia) has helped me have so many opportunities. I’m so glad I got pregnant in the younger part of my life.”

6. She was allegedly abused growing up

Farrah has claimed that her parents beat her when she was growing up, which she attributes to some of her issues today. In an interview she said: “Violence has been a big part of my life. [My parents] would beat me with a belt if I acted out. I had cuts, bruises, welts, swelling and scars. … The abuse tore me down and at times made me feel like not living. Abuse made me feel that I’m never attractive enough. I try to be so perfect.”

7. She has spent a lot of time in therapy

Farrah has spent a lot of it in therapy and isn’t shy about discussing it. She has said:
“The person who I used to be when I was growing up was very judgmental and very reactive, [but now] I’ve opened up my mind. I forgive myself. I love myself more…if not for therapy, honestly, you would be talking to a whole other woman right now.”

8. She went to school for culinary arts

Farrah has an associate degree in culinary arts and management from the Art Institute of Fort Lauderdale in Florida. She also posts cooking demos on YouTube.

9. She owns a restaurant

You have to admire the reality star trying to parlay her fame into various business ventures. Farrah owns a frozen yogurt restaurant in Austin, Texas, called FroCo Fresh Frozen. She explains: “It’s my own concept. It’s about having fresh and frozen cuisines and foods at this restaurant. It’s very family friendly.”

In 2012, Farrah launched Mom & Me Premium Italian Hot Pepper Sauce, a line of “zesty, spicy, all natural, gluten free and vegan” hot pepper pasta sauce with her mom, Debra Danielson, and her grandma. However, it didn’t work out since they couldn’t work through their own differences. “I decided currently to not proceed with my mom in her pepper sauce endeavors and many other products because our personal life is not together. And before I can move on, there needs to be certain things … and there’s no contract in place, so that’s the bigger buffer in moving forward with us.” The latest news is that the business venture is back on and the gourmet food and wine product line is expanding.

Capitalizing on her fame from her sex tapes, Farrah launched a line of sex toys that were apparently modeled to be exact replicas of her “lady bits.” Other entrepreneurial ventures include endorsing a line of hair extensions and releasing an album (which flopped). You have to admit, the girl knows how to hustle and work her “brand”.

12. She grew up very conservative

Farrah comes from an extremely conservative family. When she first got pregnant she wanted to get an abortion but her mother forbid her to because of her religious beliefs. She explains, “I tell my mom that I’m pregnant, and I tell her, ‘Here’s the form that I need you to sign, you know Plan B, you know, takes it away. Everything’s fine.’ “And my mom starts crying and then she’s like, ‘You know, we believe in God, and you’re not gonna kill a living thing.’”

Farrah considers herself a feminist. “Oh, I definitely feel that women are equal to men. No doubt about that. I mean women should have equal rights to men, every day.”

14. She was allegedly almost raped by an Uber driver

Farrah claims to have been almost raped by an Uber driver, and then subsequently got banned from the service after her on/off boyfriend rescued her. She described it as such: “My non-boyfriend threw him in the window and almost broke his car window. The cops were called. The Persian dude ran after me,” she explained. “‘The cops were like, ‘You’re harassing her’ and I was like, ‘See I told you!’”

15. She had a pretty crazy Twitter war with Nicki Minaj

Farrah has already had multiple plastic surgery treatments which include two breast augmentations, a nose job, chin implants, and multiple rounds of lip injections. She made the news for her lip injections when she sought treatment for extreme swelling. An allergic reaction to the fillers caused her lips to balloon three times her regular size.

17. She wants to be a plastic surgeon

After having what she calls a botched lip job, she announced that she would like to become a plastic surgeon. “That’s the scariest thing. It is so sad about Joan Rivers. Also, I am looking to be a plastic surgeon in the future and there are a lot of things I need to do with aesthetics and schooling and job shadowing, and a doctor who I was going to be doing an internship with I had to cancel on because he was more focused on being a celebrity and being around celebrities [than he was with his practice]. He was very disrespectful and not focusing on the health and safety of his practice.” She may be a little focused on being a celebrity herself, but she does have some ambition and drive. Let’s just wait and see what she does next.