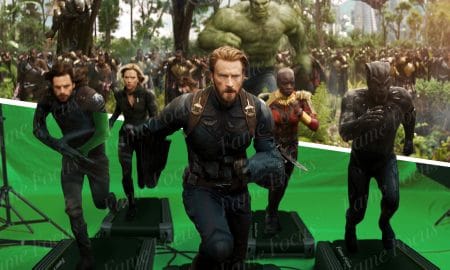 Imageworks had already worked on all previous Spiderman movies so, in an attempt to give Spiderman Homecoming a fresh new look, producers were reluctant to involve them in this project. That is until they saw how crazy good some of Imagwork’s test material was!

They created a computer-generated photo-real version of actor Tom Holland that looked and moved so convincingly that Tom and even the filmmakers thought it was real.

One of the problems Imageworks realized was how all the iconic spidey comic book poses tended to make the on-screen animated character look a bit too artificial.
To overcome this, Imageworks focused on all the wobbly bits of Tom’s performances. They paid close attention to all of the times Tom was off balance or slightly hesitant in a movement, adding imperfections to the animation and other details like being misaligned with the camera or not quite holding a pose correctly. All of this made the animation feel more human.

Imageworks also worked on ‘The Vulture’, who uses an exoskeleton with huge bird-like wings. However, for reference, Imageworks didn’t actually use vultures as you may have assumed. Instead, filmmakers wanted it to have more of a military/steampunk look. So, Imageworks took references from real jetpacks and other one-man flying machines.

The end result was a bulky, heavy, powerful exoskeleton. However, this meant that The Vulture’s movements had to be slow, in order to stay true to how heavy things move. Remembering to slow down his animation went a long way in assuring he stayed grounded in reality.

For the modern military jet and its cloaking device, Imageworks took all sorts of reference from modern, state of the art technology. Inspired by the real-world Adaptiv IR Camouflage tank cloaking system from BAE Systems, the idea they came up with was covering the whole plane in a screen that projects a 360º image of its surroundings. But instead of using a plane-shaped TV screen, they decided to cover it in LED squares and have a 360º camera to capture its surroundings.

(Cantina Creative)
Cantina Creative were responsible for creating a variety of HUD graphics, holograms and monitor designs.
The HUD for Spider-Man was designed to be unique to the character but still fit within the MCU, making sure to also include a reference to the famous Stark Industries technology.

They faced similar design and animation challenges with the tracking hologram in Spider-Man’s suit, Vulture’s HUD, and many other screen graphics. All had to fit within the film’s design style while also conveying specific story points.

(Trixter)
To help populate the Grand Central cleanup scene, Trixter added additional background workers whose sized and outfits could be adjusted as needed.

In the scene where Spiderman fights Schultz, Trixter used a CGI school and added 360 degrees of matte paintings for elements of midground and far away distances.

Trixter also added a 100% CGI Spider-Man, who actually came from Imageworks. But Trixter applied rigging, muscle and cloth systems to it to make it look and move more like a loose training suit. They also worked on Schultz’s gauntlets.

Despite being filmed with the lighting to mimic a specific time of day, it was later decided to change the time of day in post-production.

(Method Studios)
And finally, Method Studios did some amazing work creating the scenes for the Washington Monument sequence, that weren’t actually filmed on location as they were not allowed to film at the real monument. So, instead, they built very large chunks of it on set which actually gave them more control over lighting and stunts.
Now, before you go thinking; “I bet they just filmed it on its side and then flipped the camera 90º in post”, they didn’t. Instead, it was filmed upright, with Tom Holland supported on wires. However, they did have it just slightly pitched, to make stunts a bit easier, but not enough to be noticeable.