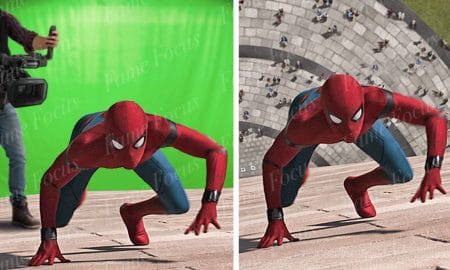 Completing 655 VFX shots and 23 sequences, visual effects company Double Negative certainly did take the lion’s share of the VFX work in Deadpool 2.
For the parachute sequence, just before the X-Force members become X-X-Force members, DNEG put together plates and aerial shots, using a mix of CG doubles for far away scenes and real actors for close up shots. One of which being Actor Brad Pitt’s on-screen cameo.
A lot of the downtown street chase was filmed on a soundstage for obvious and safety and road closure headache reasons. But it did mean that more practical stunts could be done and there was less need for digital doubles.
That said, CGI was still used in places. Like, for example, when Cable jumps out of the exploding trailer. As well as all shots of his arm, which was done entirely with CGI.
It was also decided to use a motion capture sleeve for Cable’s arm, instead of a practical effects ‘metal arm’ because that would not only have taken extra time but would also have committed them to a specific design and made it more work to change, if needed, later on. This is because, using a prop sleeve would increase the size of the arm and therefore add to the amount needed to be removed, making the whole thing counter-productive.
And with the render quality and lighting match these days, DNEG were pretty confident they could add a digital arm seamlessly.
As for Cable’s chest and neck, they used a combination of CGI and prosthetics
DNEG also worked on Firefist’s inner white-hot glowing fists, translating the concept art into the final effect on screen.
So, now for some pretty challenging and kinda controversial VFX work. Just exactly how do you switch out Deadpool’s legs for those of a young boy?
Firstly, putting trouserless baby legs on a grown man’s torso is kind of a messed up thing to do. And, how do you do it without it looking creepy, dodgy or just plain wrong?
Well, the production team soon realised that the more realistic looking, or “normal”, they made the legs look, the more people became immersed in the humour of funny, cute, little baby Deadpool pegs, rather than be repulsed by such a disturbing, horrible image.
So then comes the next question; real of CGI?
Well, DNEG went with CGI. As sticking a stand-in toddler’s legs onto actor Ryan Reynolds would have meant trying to sync up two different performances and may have also compromised Rayan’s performance as Deadpool.
Plus, the legs walking across the room had to be CG anyway, to better control lining up with Deadpool’s walking.
But, how to shoot the scene?
Do you make a hole in the couch and have Ryan kneel inside it, adding CGI baby legs in post? Well, while they did initially explore this idea, they soon realised that not having his legs free affected Ryan’s body language too much. So to get more of a natural feel they had him sat normally but put markers on his legs. This made the performance more genuine and even allowed Ryan to almost suggest some performances for the legs.
Also, having childish poses that look funny on a full-grown man or adult poses on childlike legs for each time it cuts back to him, made the gag even funnier.
For having him actually walking on his infant-like appendages DNEG did some quick mocap tests, having Ryan walk on his knees, which actually ended up looking quite good and gave them the height they needed. All that was left after that was to make sure he didn’t lean backwards or forward too much because it wouldn’t actually be possible to do that if he had short little legs. So, for realism, he needed to stay as upright as he could.
Finally, we have the very brief shot of X-Men Members in the X-Men mansion that I said Deadpool technically wasn’t in. And that’s because he wasn’t.
Deadpool 2’s production team sent lineup data and camera lens info to director Simon Kinberg, who was a producer on Deadpool 2 but also happened to be the director of ‘X-Men: Dark Phoenix’. So, while filming Dark Phoenix, he managed to get them a cheeky little shot of some mutants, matching the camera angle and lighting, ready for Deadpool to be superimposed on top.