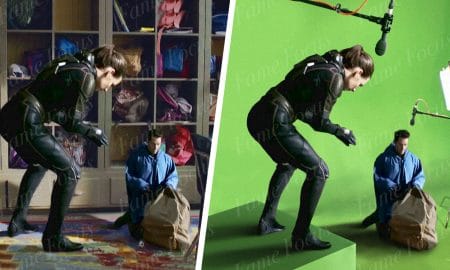 From incredible hand to hand combat with knives and guns to fighting with horses and guns, John Wick – Chapter: 3 featured all sorts of creative and unbelievable, places to have a bit of a scrap.
Yes, modern-day VFX allow storytelling (and fight scenes) to get crazier and crazier, while at the same time still looking, somehow, believable.
One good example of those incredible VFX sequences is the infamous bike chase over the Verrazzano-Narrows Bridge.

Image Engine delivered only 8 VFX shots for this scene. But that didn’t mean that there wasn’t much work involved. With shots as long as 1000 frames, full of extensive and complicated CG, plate stitching and comp integration, Image Engine certainly had their work cut out.
Creating assets that had to be photoreal while also matching practical ones. Creating seamless camera transitions between the Verrazano bridge footage and greenscreen shots while, at the same time, matching the animation style to the live-action stunt shot. As well as adding extra realistic-looking VFX elements and executing perfect 2D integration.

The sequence was made by combining on-location shots of professional stunt drivers riding at 100km/h, as well as some rigged crash stunts with dummies, on the Verrazano Narrows Bridge and some less impressive-looking shots of Keanu and the guys sat on bikes in front of a green screen while being pushed around by some other guys in green zentai suits, for the close-up shots.
In order to allow for seamless transitions between shots, they paid careful attention to both action and camera movement choreography.

To get a seamless transition between the riders and bikes, they took cues from the shots of the Verrazano Bridge stuntmen.

Of course, Keanu’s face also needed to be added in some shots. But, unfortunately, only one take of Keanu riding on the real Verrazano bridge was filmed so that take was inevitably the one that was used for the base of the 2.5D face replacements as it had the correct lighting on it.
They also created a 3D face replacement of Keanu using cyberscan and some texture photography while creating his hair in Houdini.

Stitching together the real shots with the greenscreen ones required a mix of cutting out bikes frame by frame and tracking CG objects and backgrounds all to the live-action footage.

Getting the animated CG background to perfectly match the real moving one is really where the magic of this shot lies and Image Engine have absolutely nailed this!