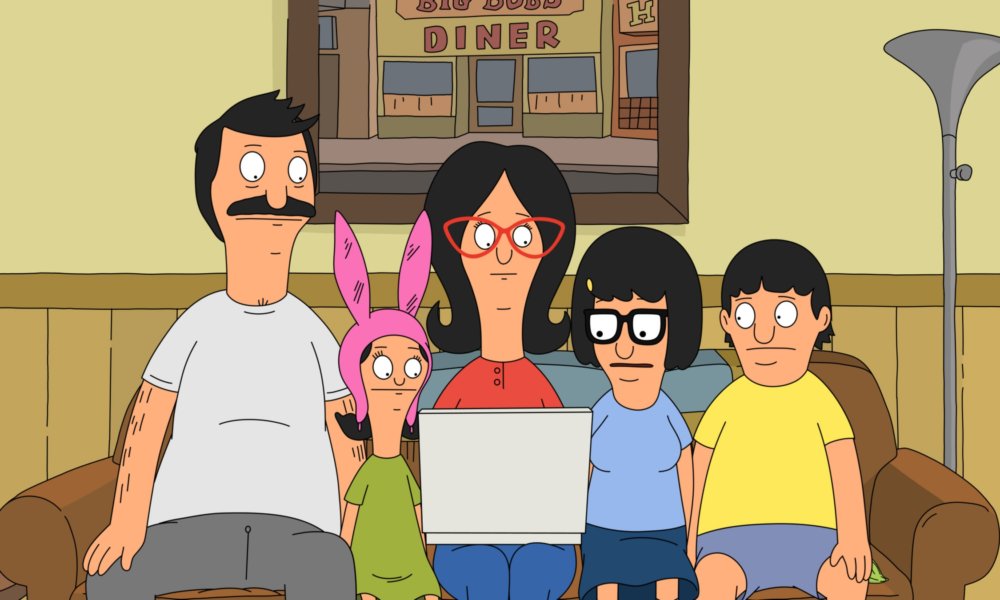 2. Like Sterling Archer? You’ll Find Something to Love in Bob Belcher

At the center of Bob’s Burgers is struggling dad and part-time fanatic Bob Belcher, voiced by H. Jon Benjamin, a man who’s made a name for himself playing douchebag special agent Sterling Archer on FX’s Archer. If you like Archer’s tendency to veer into the maniacal, then you’ll love Bob at his most extreme. Otherwise, he’s a good dad who’s extremely passionate about puns, his burgers, and doing right by his kids.

3. Tina Belcher is the Single Most Quotable Character on Television

The monotone eldest daughter, Tina Belcher is the very epitome of stoicism. Of course, don’t tell her that. Tina is true to herself in the most awkward way possible. She’s an unabashed lover of horses, zombies, and teenaged boys butts. Also, she’s voiced by a man (just letting you know). With zero context, Tina drops endless quotable lines that just beg to be put over a picture of you in middle school. A few: “I’ve only dated two and a half boys but I’ve thought about boys and relationships a lot.” “If boys had uteruses they’d be called duderuses.” “I don’t need a boy to pay attention to me, I’ll pay attention to myself.”

4. Louise Belcher is the Mischievous Kid We All Kind of Wish We’d Been

If you could be nine again, you’d want to be Louise Belcher. Voiced by the inimitable Kristen Schaal, Louise is the spritely youngest child of the Belcher clan. Never seen without her patented pink ears, Louise is one tough customer. No, literally everyone in her family is freaking terrified of her. You do not mess with Louise. She’s also one of the most intelligent, and hilariously mocking characters on television.

Gene Belcher is the unbridled id of the Belcher family. He’s the middle child, but you’d definitely be hard-pressed to overlook him (he’s no Stephanie Tanner). An effortlessly enthusiastic kid, Gene’s love of music is rivaled only by his love of food (which is only rivaled by his love of bodily functions).

6. No Part of the Show Would Work Without Matriarch Linda

If Bob was the only parent at the burger shop, things would get pretty dour. He’s a fairly easily beaten man, which is why he’s nothing without his feisty wife, Linda, the bouncy emotional core of the show. She’s always trying to inject a little whimsy into the show (even though she fails miserably), and she’s the clear progenitor of Louise’s toughness and Gene’s musical bent. Plus, she rocks the high school reunion mic like a pro. All riiiight!

7. It is Well and Truly Bizarre

Oh, where to begin. There’s Kevin Kline’s Calvin Fischoeder, the white-suit-wearing eye-patched landlord who once instigated a water balloon fight among his tenants for the prize of a month’s free rent (while everyone else’s rent doubled). There’s the show’s propensity toward fever dreams. There’s an episode where a mob of demented turkeys overtake the town. Those are just examples at the outside of the giant glob of perfectly executed weird that is Bob’s Burgers.

8. It’s the Most Musical Show on Television (That’s Not Also Stupid)

Yeah, okay, there are musical talent shows on TV and there’s always one crap show trying to awkwardly weave pop music covers into their narrative, but Bob’s Burgers isn’t that. The show is prone to creating its own music with varying end results. From Linda’s atonal improvisations to some really well done songs, the music is ever-present in Bob’s Burgers. It’s never overpowering, though. Every song is funny, few last very long, and even if you don’t like musicals, you might find yourself humming a few bars once the episode is over.

9. In Spite of the Fact that Circumstances are Dire, the Belchers are Relentlessly Upbeat

To be totally frank, a lot of the “real world” circumstances surrounding the Belchers are pretty grim. They’re kind of a motley crew of outcasts and losers. Bob is constantly outdone by his restaurant rival from across the street, Jimmy Pesto, and the family rarely lands on top. What’s more, there are tons of thinly veiled dark secrets lurking under the surface of the small seaside town. And Bob’s Burgers plays all that stuff for weirdly optimistic humor. In spite of the fact that dark stuff is happening, Bob’s is never a downer. It just knows how to see the silver lining.

10. The Supporting Cast Gets it Done

Okay, one big parallel between Bob’s Burgers and The Simpsons is the increasingly huge (and ridiculous) supporting cast of characters. Rare is the background character in Bob’s introduced and then forgotten. And they’re all uniquely lovable. There’s regular customer Teddy, possibly the saddest, yet most cheerful handyman on the planet. There’s Darryl, the stereotypical eighties nerd who accompanies the Belcher kids on all their adventures. There’s habitual criminal Mickey, who pops up in roles as diverse as bank robber and carnie. Even better, a big portion of the supporting cast is voiced by some of today’s biggest comedy stars like Aziz Ansari, Bill Hader, Gary Cole, Jordan Peele, Zach Galifianakis, Megan Mullally, and more.