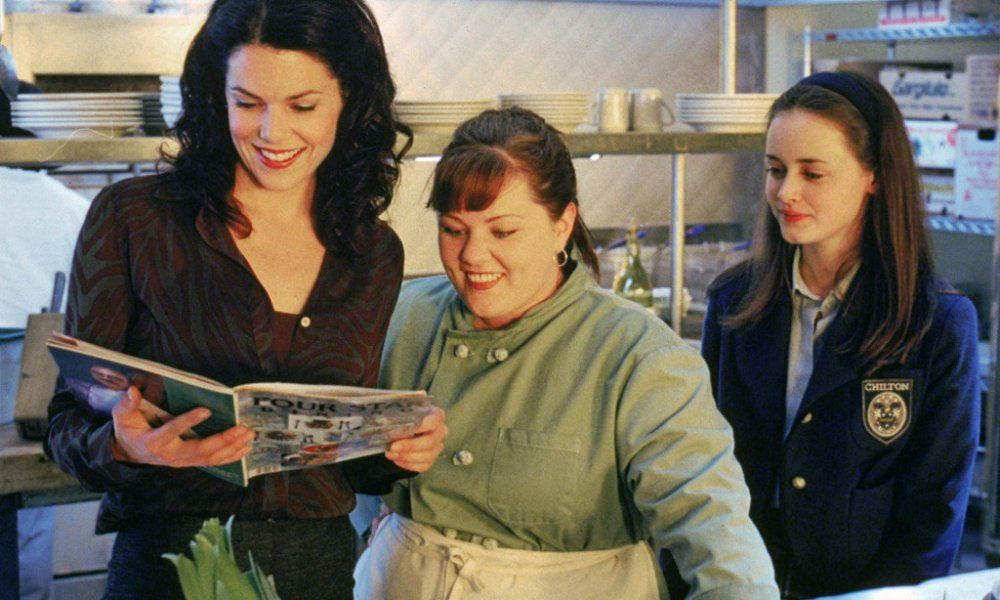 Now that Gilmore Girls: A Year in the Life is upon us, we can all begin to nit pick the minutia of Amy Sherman-Palladino’s return to Star’s Hollow. Before we dive into that critique, however, let’s just say thank God the Gilmore women are back in our lives. Though this newest installment may not have been the return to form some expected (like it ever could have been), most will find that the dialogue is still snappy, the relationships are still melodramatic, and Gilmore Girls is still the TV equivalent of a warm cup of cocoa. That said, the show’s creative minds might have benefited from taking the show in a new creative direction. Namely in shining a spotlight on the best part of the program: Lorelai’s Chef Sookie St. James played by current comedy superstar Melissa McCarthy. Though there was a bit of drama going into the revival, McCarthy is back to reprise her old role and though it’s brief, it’s television gold. Which is why we needed more Sookie. Heck, just make the whole revival a look at her life. It would have been better in the long run. Here’s why:

1. Lorelai Is Half a Person Without Her Bestie

Throughout the show, Lorelai’s general selfishness is only tempered by the wonderful people with whom she surrounds herself. Sookie has always been the standout, there. She may not have been long on advice, but her kooky behavior always forced Lorelai to step up and be a bit more adult (which she could totally use).

Unlike Lorelai, who seems to find her bliss at the end of season 7, Sookie is always on the prowl for something bigger and foodier. Just look at the difference a decade makes. When the revival picks up, Lorelai is essentially in the same place she was ten years ago where Sookie is another kid deeper and off on a journey to discover the world’s best vegetables. Sookie has evolved; Lorelai hasn’t.

3. It Would Have Saved Us Staring at Lauren Graham’s Bad Plastic Surgery

All right, all right, I know it’s incredibly bitchy. Hollywood puts a lot of pressure on women to stay young. Yada yada yada … it’s a hack job, though, right?

4. Sookie is the Reason People Travel to the Dragonfly

Lorelai is one heck of a great manager, of that there can be no doubt. It’s Sookie, though, the mastermind in the kitchen, who brings in the real crowds. She’s the draw. Just consider the fact that, with Sookie out on the road, not even culinary luminaries like Rachel Ray or Anthony Bourdain could fill her shoes. That’s some real talent.

5. Jackson is More Likable Than Most of Lorelai’s Suitors

Okay, let’s make an exception for Luke, here, because he doesn’t suck (unlike everyone else Lorelai dates). That said, compared to the weird vegetable peddler, Jackson, Luke is as boring as they come. A show that featured Sookie would inevitably mean more Jackson, and watching those two argue about vegetable quality is never a bad time.

6. Rory’s Career is a Total Disappointment

When the series started, the whole point of Lorelai’s getting back in touch with her parents was to get Rory to a point where she could follow her life long dream of being a journalist. A journalist. Not some cop-out memoir writer who bounces around between her ridiculously lavish housing options while lamenting the fact she might actually have to do some hard work or overcome scrutiny to accomplish her goals. She’s writing Gilmore Girls? Ugh!

7. Sookie’s Character Has Reason to Grow After the Seventh Season

When Gilmore Girls ends, Lorelai has pretty much achieved every one of her stated goals: she’s found her soul mate (or a man who worships her, which is close enough for Lorelai), she’s put her kid through college, and she’s established a nice business in her kooky modern Mayberry. Things are good. Sookie, on the other hand, is an artist; she’s always on the hunt for new recipes and better ingredients. Hey, it’s not much, but it’s more than Lorelai’s got.

8. Because Having Sookie Yell at Norman Mailer is Freaking Amazing

In one episode of the original run, Norman Mailer is hanging out at the Dragonfly Inn without actually ordering more than tea. Her pregnancy hormones running out of control (even though she doesn’t know it), Sookie is driven to the point of insanity at not having more orders from the acclaimed author. So, while he’s mid-interview, she storms out of the kitchen and really gives it to him. If only more TV stars would scream loudly at literary icons, the world would be a better place.

For those fans who don’t tune in exclusively for Lorelai’s weekly installment of self-inflicted drama, Gilmore Girls’ comedy is probably the best part of the show. And when Lorelai is at work, Sookie is the one who controls the laughs on the show. Whether she’s complaining about ingredient quality or completely dominating her kitchen, everything Melissa McCarthy does is awesome. She only gets about four seconds of screen time in the revival and it’s still some of the funniest material on offer.

10. It Would Have Meant More Kirk

This is probably wishful thinking, but if Sookie is running a kitchen, she’d have jobs. Kirk takes jobs. More Kirk is never a bad thing.

11. She’s As Much a Part of Star’s Hollow as Lorelai

A shift in focus to Sookie wouldn’t mean cutting down screen time for the Star’s Hollow locals (the other best part of Gilmore Girls). The Dragonfly chef is at just as many of those ridiculous town meetings as Lorelai is. Just transfer the silly comments from Gilmore to Sookie and you’d never skip a beat.

12. Melissa McCarthy is the Most Talented Actor on the Show, Hands Down

Let’s not even look at the fact that McCarthy is the only one of the cast with a thriving career and just focus on her input to the show. Her character is way more unique than Lorelai’s, and yet McCarthy is so dialed in, it’s incredible. The way she effortlessly blends her saccharine personality with the heart-rending fear she inspires in her kitchen staff is somehow both realistic and hilarious.

At one point, Nick Offerman plays one of Jackson’s brothers. He’s operating under the impression that Lorelai is a nymphomaniac. In an attempt to trigger her addiction, he spends literally the entire episode hitting her with terrible mountain man come ons. It’s amazing, and any opportunity to see more of Jackson’s weird family would be incredibly welcome.