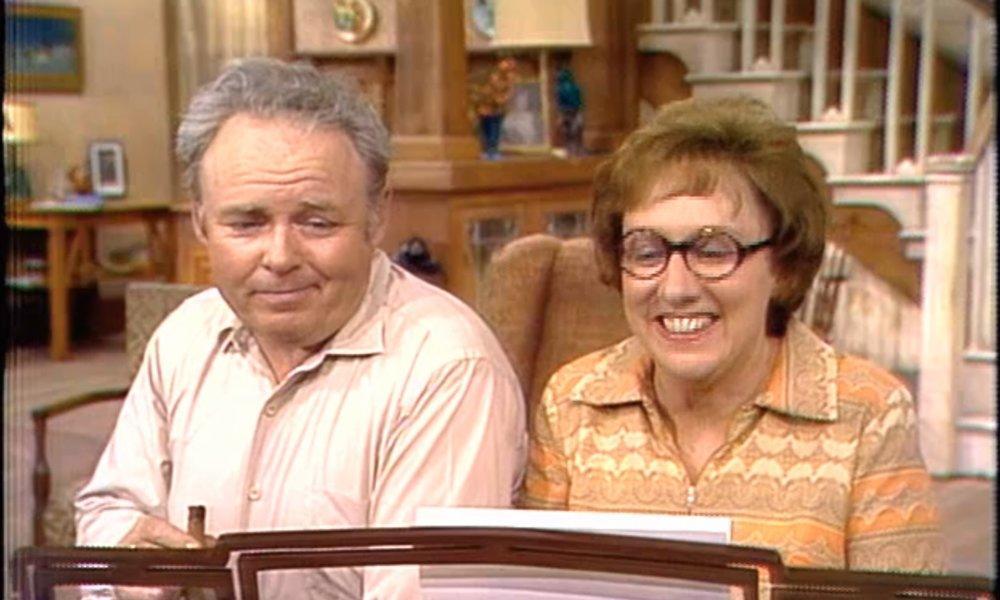 The award winning All in the Family pushed the envelope in many ways, which is ultimately what made it America’s number one television series for most of its nine year run. So provocative and edgy, the show opened with the following warning statement: “The program you are about to see is All in the Family. It seeks to throw a humorous spotlight on our frailties, prejudices, and concerns. By making them a source of laughter, we hope to show—in a mature fashion—just how absurd they are.” Not much was off-limits in this groundbreaking sitcom, and they tackled such controversial topics as rape, racism, women’s liberation, the Vietnam war, homosexuality, menopause and death. Working class protagonist Archie Bunker was about as rude and crass as it gets, yet was somehow lovable at the same time. Here are some behind the scenes issues from Norman Lear’s social-comedy classic.

1. The producers were prepared for a big backlash

The CBS network knew they were pushing buttons with this show, and they were prepared to deal with the backlash. They actually hired dozens of extra phone operators to work the switchboards to deal with anticipated angry callers…but those calls never came.

2. Sally Struthers sort of lucked into her role

Actor Rob Reiner’s wife at the time, Penny Marshall, almost got the role of Gloria after he had been cast as hippy Michael “Meathead” Stivic. Sally Struthers later asked why she got the part instead and was told it was because she had “a fat face and blue eyes like Carroll O’Connor.” Penny had done a better audition but she looked too much like Jean Stapleton, and they preferred a paternal resemblance for Archie’s “little goil.”

3. The show got on the air thanks to the network’s “rural purge”

In the 1960s CBS was full or rural based shows including Green Acres, Petticoat Junction, The Beverly Hillbillies and Mayberry R.F.D.. They were popular, but the network didn’t want to get pigeonholed so they started mixing things up. Norman Lear’s All in the Family, based on the British series Till Death Us Do Part, seemed topical and relevant enough to appeal to a younger generation and wider demographic.

4. Mickey Rooney turned down the role of Archie

Mickey Rooney was initially offered the role of Archie but he turned it down. Norman Lear was pitching him the character as a “a bigot who uses words like ‘spade.’” Mickey interrupted him and said: “Norm, they’re going to kill you, shoot you dead in the streets.” Through skilled writing and superb acting, Caroll O’Connor managed to deliver these offensive lines without being shot! Also considered for the iconic role were Tom Bosley, Jack Warden, Gavin MacLeod and Jackie Gleason.

5. Archie Bunker was based on Norman’s father

Herman Lear frequently told a young Norman that he was the “laziest white kid I’ve ever seen,” and referred to his wife as a “dingbat.” Norman channeled this homelife directly into his work, even down to the detail of everyone speaking so loudly. Undoubtedly, many people in the audience recognized a bit of Archie in a neighbor, uncle or co-worker too, as people certainly responded to the character.

6. Norman ignored the guidelines CBS laid out for him

CBS was fine with having an edgy show on the network, but they wanted to be in control of just how edgy that was going to get. For example they suggested that the terms “queer” and “fairy” should be used as little as possible, and “regular fella” was better than saying “straight.” Lear did not listen, and deftly got away with it.

7. Archie was absent for a while over a wage dispute

There were four different episodes in season five that were shot without Archie, due to Carroll O’Connor’s protest over wages. He claimed he was back-owed money and he wanted more vacation time. They wrote him out to prove that they would kill off his character if he wouldn’t cooperate. They even plotted out a scenario where Archie’s best friend Stretch Cunningham (played by James Cromwell) would move in to the Bunker’s household. Ultimately, however, they gave him a raise and he continued on to the end of the series – and four more years with Archie Bunker’s Place. Once the contract issue was resolved, the character of Stretch died in a hilarious episode where Archie must give a eulogy while just finding out that his friend was actually (gasp!) Jewish.

Sally Struthers wanted to have a successful film career as well, but when she auditioned for the 1975 John Schlesinger film The Day of the Locust the show said that she could not take the time off for it. She took them to court and they countered with a contract that said she could not work elsewhere.

9. The sing-along theme song was plan B

The opening theme song “Those Were the Days” where Archie and Edith sing at the piano (or caterwaul off key in some places) is one of the most memorable parts of the show. The original plan, however, was just to have an orchestra play the tune. Due to budgetary constraints, they decided to have the two actors sing the song, and it was a big hit with the audience. Each season they would sing it anew, so there are several different renditions of this song.

10. Sammy Davis Jr. had the funniest moment on the show

Sammy and Carroll were good friends, so when Sammy requested a guest spot on the hit show he was given one. The look on Archie Bunker’s face when Sammy Davis Jr. planted a kiss on his cheek for returning his lost briefcase, it got the longest and loudest laugh from the audience in the entire series of the show.

11. There were three different pilots shot

The show was adapted from a British show that Norman Lear bought the rights to, and it took three different pilots with recasting and renames to finally get the show off the ground. The first pilot was actually financed by ABC, but then they turned down the second, and CBS finally took the third. As they say, third time’s a charm.

12. Harrison Ford turned down the role of Mike Stivic

Did you know Harrison Ford was offered the part of Mike Stivic? He turned it down because he felt like Archie Bunker’s bigotry was too offensive, and wasn’t sure how that was going to go over with the audience at the time. Ford’s career turned out okay, though, so maybe it was all for the best.

13. Norman wanted the show shot in black and white

Norman Lear had a lot of ideas about how he wanted All in the Family to go, many of which he got away with. But the network did not allow him to shoot the show in black and white, like the British original Till Death Do Us Part was.

14. Edith’s Rape Episode Was Written for a Different Show

One particular tense episode saw Edith Bunker fending off a would-be-rapist during her 50th birthday party. It was a shocking subject matter to approach back in the 1970s. The episode was actually written for the sitcom One Day at a Time, where the mom Ann Romano was supposed to endure that scenario.

15. The “sock and shoe” debate came from real life

Rob Reiner was in the habit of putting on one sock and shoe before moving to the next foot, and when Carroll found out about this he tried to correct him. They decided to write the silly debate into the show.

16. Rob Reiner had to wear a hairpiece

Rob Reiner was already going bald at a rapid pace when he got cast on the show, so he had to start wearing a hairpiece in the first season of the show and stuck with it. He was also told to grow a mustache as he looked too young without it.

All in the Family has the dubious honor of being the first show where a toilet flush (or should we say “terlet”) is heard. You never know when that piece of TV trivia is going to come up!