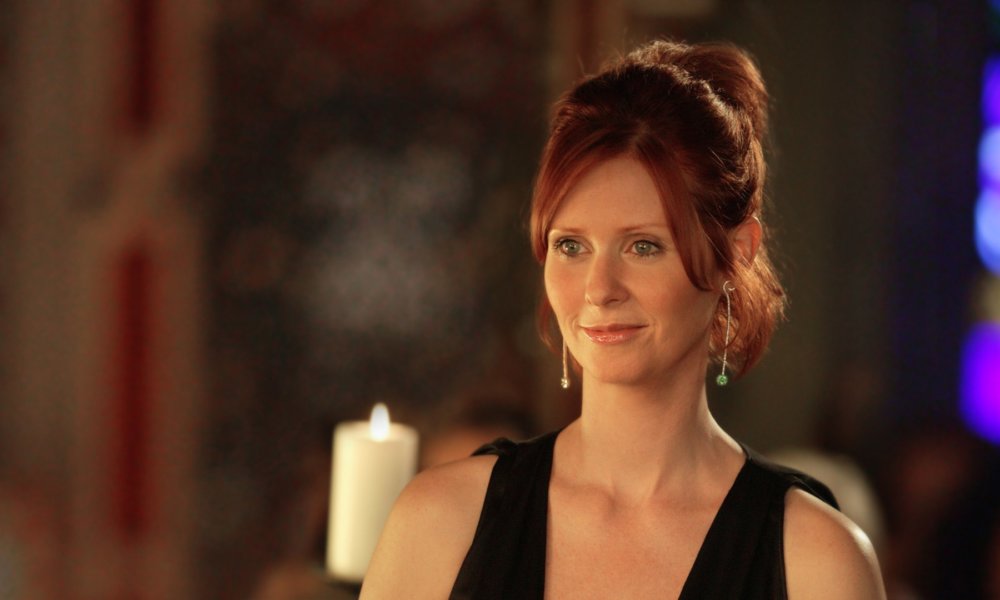 Miranda Hobbes on Sex and the City was in some ways the most cynical of the bunch. Portrayed by Cynthia Nixon, she was a strong, successful, empowered lawyer who believed in equality between men and women. She was a straight-shooter who tells it like it is, and some found her character to be a tad bitchy at times. However, she always had her friends’ backs. Just because she had a tough exterior doesn’t mean she didn’t have a soft side, and she could get her heart broken, just like the rest of the gang. Here are some of Miranda’s best quotes.

1. Miranda always made it clear that bad guys existed in all forms

If anyone ever suggested there were big differences in different types of people, Miranda was quick to set the record straight. Especially when it came to dating.

“I have been out with some of those guys. The short, fat, poor ones. It makes absolutely no difference. They are just as self-centered and unappreciative as the good-looking ones.”

2. She didn’t hold back when it came to doling out the tough love

Miranda was always that friend who tells you what you need to hear, even if you don’t want to hear it.

“Jesus, every time you get near him, you turn into this pathetic, needy, insecure victim. What pisses me off the most is that you are more than willing to go back for more.”

3. When she was realistic about her dating technique

Miranda didn’t ever consider herself the hottest when it came to looks, but she owned who she was and knew what worked for her.

“Sexy is the thing I try to get them to see me as, after I win them over with my personality.”

4. She was always open about not knowing what she was getting herself into

Generally when people are wondering if someone better might come along it’s a good sign that they’re not with the right person. And then again it could also be fear.

“Maybe I should be honest and tell him how I really feel. Which is — what if somebody better comes along?”

5. She was scared to move in

Miranda perfectly summed up a lot of the fears that people have about getting close in relationships…the small stuff.

“I do love you, but I’ve never lived with anybody before. And I’m stubborn, and I like the remote, and I can’t cook. I don’t do laundry, sometimes for like, two weeks, and my sponges smell. You’re going to see all that, and I’m scared.”

6. She was never totally satisfied

Instead of being super cheery with the glass is half full thing going on, Miranda tended to keep it really real…sometimes in a slightly negative direction.

7. She had some extreme tactics for getting over people

Miranda wasn’t one to sit around wondering what went wrong with a guy. No she was more likely to assume that it had nothing to do with her at all.

“It’s like those guys you have the great second date with, and then never hear from them again. I pretend they died.”

8. She was always motivated

Miranda was an extremely hard worker, and when she set her mind to something she really went out and got it.

“I’m going to find my inner goddess if it kills me.”

9. She said the things we all think

Miranda could be pretty rational, and often said the little things that we all think.

“I miss napping. They look down on napping at work.”

Even when that help came in the form of prescription drugs.

11. She was always trying to be reasonable

It’s not that Miranda was always looking for the silver lining, but she was generally trying to be accepting of her fate, and sometimes acceptance is all you muster.

“I am never going to be happy. It’s just not going to happen for me.”

12. She didn’t have much patience for bad behavior

And she always believed that she deserved the benefit of the doubt.

“The least he could do is wait to get to know me before he rejects me!”

13. She certainly could dole the advice

Miranda didn’t always know what to do about her own personal life, but she was pretty good at bluntly giving out advice to her friends.

14. She could be pretty ruthless

Miranda was more sensitive than she let on, but she certainly could act like she didn’t let a breakup get to her.

“We loved, thank you. You enriched my life, now go prosper. But I’m more: We didn’t work out. You need to not exist.”

15. She was even relatable when she was actually sad

When Miranda was actually down in the dumps she was relatable as well…and struggled with not inhaling her feelings by way of food.

“You know what used to make me feel better? Cookies.”

Miranda didn’t accept other people’s judgments of her.