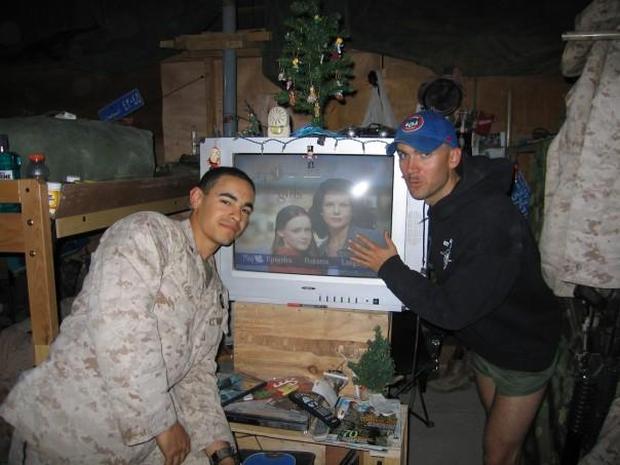 In celebration of Netflix’s revival of Gilmore Girls, people were pretty psyched to spend another ‘Year in the Life’ of their two favorite small town power talkers and their merry band of oddball townies. Amy Sherman-Palladino’s limited series was definitely a cause for rejoicing, and from more people than you might think. On December 9, CBS News reported that four buddies who’d flown from every corner of the country to binge out the entirety of the Gilmore Girls revival. That might not be news, until you discover that these men were Marines who met (and discovered Stars Hollow) while serving in Ramadi, Iraq in 2005. You might not think that hardened soldiers would see much good in a show about the life and times of two upper class ladies, but you’d be wrong. These soldiers found Gilmore Girls to be an indispensable part of their overseas deployment. Here are some of their thoughts on the series, alongside a few lessons that they took away from Amy Sherman-Palladino’s perky little soap opera.

1. ‘At Least For Me, Stars Hollow Was the America I Think We All Thought – We All Wished We Were Fighting For.’

If you’ve never seen an episode of Gilmore Girls, perhaps the first thing to know about these spunky ladies is that they live in a small Connecticut town called Stars Hollow. The idyllic little town just a short trip out of Hartford is a peculiar mashup of traditional charm and new wave kooks.

2. America is Filled With a Ton of Different People All of Whom are Worth Saving, Even if Most of Them Are Super Weird

Simply watching Rory and her mom hang out at Luke’s diner while Kirk talked about his latest job or Miss Patty instructed her young students on proper etiquette (before leaning over to confide some lurid sexual exploit as Lorelai walks by) and you can’t help but fall in love with this modern day Mayberry. It’s the small town we all wish we could find and settle down in.

3. Wonderful Surprises Can Be Found in the Weirdest of Places

The Marines — who were stationed in Iraq as part of a sniper unit — weren’t fans of the show before they were deployed. It wasn’t until one of them happened across the show’s second season in “some library in the middle of a base in Iraq”.

4. It Sounds Silly, But Keeping Cheerful Can Help You Get Through Even the Toughest Experiences

Things on Gilmore Girls were far from perfect (mostly because Lorelai loved to complicate things by flying off the handle, but that’s neither here nor there), but the vast majority of the characters on the show always kept the quirk (and the jokes) to a maximum.

5. Sometimes the Best (and Worst) Experiences Are Made Better Because You’re Surrounded By the Right People

6. A Little Bit of Levity, or Some Low Stakes Drama Can Be the Perfect Antidote to Your Real World Troubles

You’d be hard pressed to say that most of the drama on Gilmore Girls is life or death. In fact, for most of the show’s first three seasons, the worst thing that can happen is Rory heading off to a state school (imagine the scandal!). After that, the worst thing that could possibly happen is someone’s pride might get hurt. When compared to the actual terror facing these Marines on their regular patrols, the world of Stars Hollow is a giggle-worthy trifle.

7. Even Macho Men Need a Little Time to Explore the Softer Side of Things; Gilmore Girls Actually Served as a Reminder

Said one Marine in a letter he wrote to the show’s creators, “Part of the attraction is a simple case of contrasts. I live in a strict, macho, sometimes violent world that very often does not make sense. Stars Hollow, a town where Gilmore Girls takes place is pretty, it’s warm, friendly.”

8. Stay True to Yourself (and Your Threads) and No One in the World Can Touch You

When the Marines contacted Amy Sherman-Palladino, she responded by sending them four jackets. She quickly assured them that they would not be the only men on the planet who were wearing them. “It’s a masculine piece of clothing,” one declared.

9. There’s Absolutely Nothing Wrong With Escaping Harsh Reality From Time to Time

“In the end, much of the entertainment is escapism. And for me and a few friends over here in Iraq, there’s no place we’d rather escape to. It reminds us of all the best parts of home.”

10. The Two Leading Women Are Much More Fun to Watch Than the Unshowered Dudes Who Are Surrounding You

Listen, not to put too fine a point on it, but it’s a bunch of dudes in the middle of nowhere, and sometimes just knowing there are women out in the world can make things a little easier.