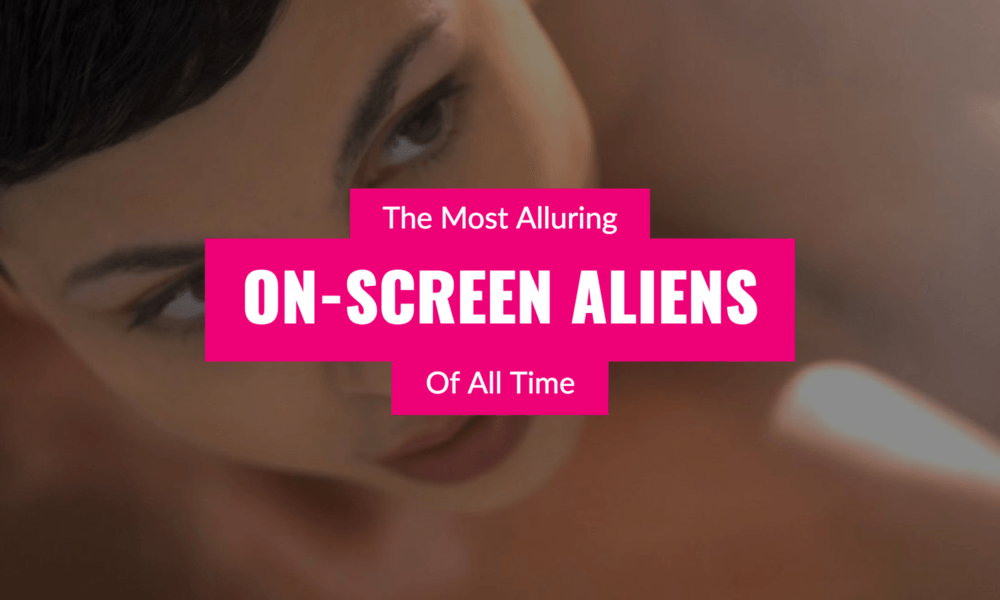 Maybe Hollywood has a thing for big blue aliens. Or maybe it’s the fact that Avatar’s Neytiri was so capably brought to life by the luminous Zoe Saldana. She’s the kind of hippy dippy free spirit that every man can’t help but be attracted to, even with a tail. Few fellas would be put off by the ten-foot-tall vixen, in spite of the height difference.

3. Whatever they named Lisa Marie in Mars Attacks!

Alright, so it’s technically camouflage, but the beehive-rocking gliding lady alien from Tim Burton’s 1996 masterpiece Mars Attacks! absolutely deserves a spot here. How can you not take some time to think about Lisa Marie whenever the opportunity presents itself? Especially when the alternative is a four-foot-tall green beast with no lips, no eyelids and a seriously bad case of cranial swelling.

Sex and danger are always fun things to intertwine, and there’s no alien who’s a more potent combination of sexiness and danger than Natasha Henstridge as Species’ Sil, the lonely alien lady who just wants to find some lucky human with which to mate. Okay, so an encounter with this lady is likely to be your last encounter ever (unless you have a grenade launcher on hand), but a dance with Sil might just be worth the penalty.

Hands down the hottest alien in film who’s composed mostly of chloroplasts, Lara Flynn Boyle’s shape-shifting baddie Serleena certainly knows the value of a good makeover. The fan of skin tight leather may have caused issues for Will Smith and Tommy Lee Jones in Men in Black II, but you can bet that at least a little part of these guys was thrilled that Vincent D’Onofrio didn’t return for the sequel.

Over the decades that the various incarnations of the series have been on the air, the Star Trek series has hired a slew of attractive actresses to portray both alien and humans alike. For pure unadulterated hotness, though, we have to give the grand prize to Jolene Blaylock, the woman who played T’Pol on Star Trek: Enterprise. One glance at the stoic looker is more than enough reason to understand why the Federation made an exception for this Vulcan.

We’re not going to begin to try and pick a favorite incarnation of Superman’s cousin. Why would we? Whether it’s CBS’ newest lady in blue, Smallville’s Kara Zor-El or even Summer Glau voicing the Kryptonian in Superman/Batman: Apocalypse. Every version of the young woman offers something for audience members to love no matter your particular tastes.

Okay, technically she’s a Borg drone, not an alien, but she’s on a space-aged show so let’s not split hairs. You can’t deny, Jeri Ryan as Seven of Nine is smoking hot, with or without that silver flourish over her eye. The way she rocked her metallic bodysuit was no doubt the main reason a new generation tuned into Star Trek: Voyager. Like Spock before her, she served as a perfect foil for Captain Janeway complete with astute commentary on the human condition. When she joined the cast in season four, viewership went up by 60 per cent – but we doubt it had much to do with her verbal insights. Just look at her.


9. That One Alien from Total Recall

Never underestimate the raw caveman-like nature of men everywhere. Within even the most mild-mannered dude you know lurks the thumping heart of an animal. That’s the only way to explain the lingering attraction to the random prostitute who options Arnold Schwarzenegger in Total Recall. You know the one we’re talking about. You know … and ten-year-old you found yourself rewinding that bit in the movie more than once or twice just so you could get another peek.


10. Oola the Dancer in Jabba’s Palace

Technically, everyone in Star Wars is an alien. So, you could absolutely make the case that Natalie Portman or Carrie Fisher absolutely deserve a spot on this list. However, we’re going to go with the most unlikely candidate, a woman who had zero lines in the film and yet whose legend remains. I’m speaking of course of the dancer in Jabba’s Palace, a minor character so popular that they actually brought her back 20 years later to film new scenes for the re-release of Return of the Jedi.

Alright, we know that ABC’s V was kind of the pits, but you don’t need to be in something that’s high quality to be incredibly attractive. So when you’re talking about hot aliens, you have to mention Morena Baccarin’s politely sinister Anna, the leader of a race of yada yada yada invasion of Earth blah blah blah. The point is that even though the show was not great, Morena Baccarin was infallibly gorgeous whether she was cooing platitudes, handing out threats or eating rodents.

Statuesque is the word for this synth-voiced goddess from another planet. Diva Plavalaguna only has a small part in Luc Besson’s Fifth Element, but her short performance has left a lasting mark on pop culture. Hey, if her dub step voice isn’t enough for you, just consider the fact that the Mariah Carey of space also risked her life to protect peace and love. What’s hotter than that?

We know we don’t have to validate Chewie’s spot on this list, but indulge us, anyway. What more could you want in a partner than someone who’s tall, dark, loyal, succinct, useful and cuddly all in one 7-foot-tall package. Chewbacca may play second fiddle to Han Solo’s space rogue, but the female fans of Star Wars know what makes a good man, which is why Chewie has been melting hearts since 1977.

Starman is a 1984 film in which a young Jeff Bridges is sent to Earth with the express intention of smoldering. Sure, he may not get the girl in the end, but the fact that he’s kind of unattainable is part of what makes this quiet stud so attractive. If that’s not enough for you, there’s always the fact that he’s basically a ripped alien Jesus figure, sent here to spread love and knowledge. No drama with this guy … until the government knocks on the door, of course.