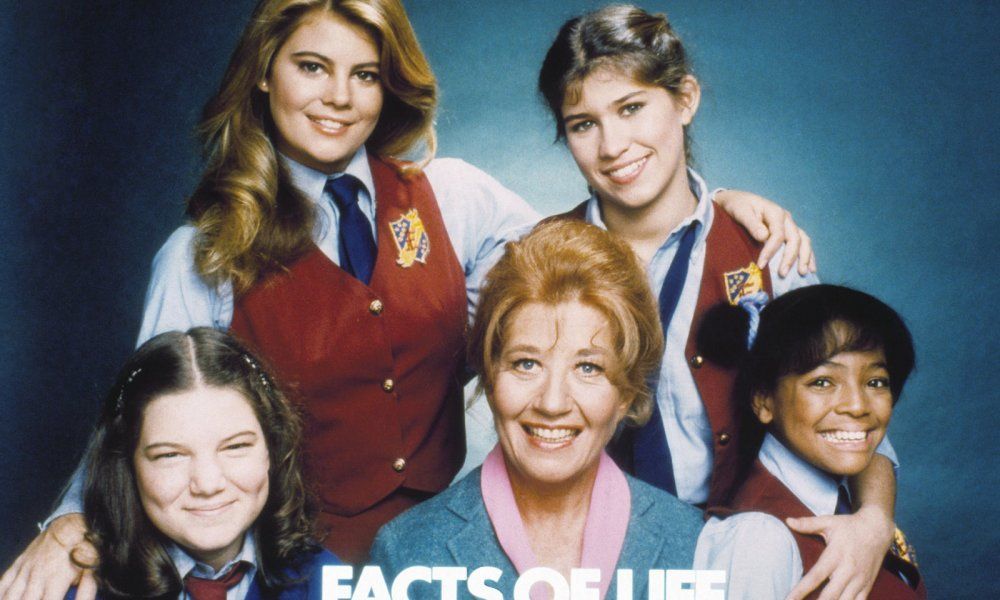 2. The season two cast didn’t know about the cuts

When the core actors returned for the second season they had no idea that the cast had been pared down. Lisa Whelchel has said: “Everybody was shocked. Nobody knew—that I know of—that they were going to make this major cut.”

3. The show was progressive in certain ways

Did you know The Facts of Life was the first TV show to ever feature an all-female cast? Later on, some guys were added to spice things up, most notably George Clooney as the school handyman. Geri Jewell became the first performer with cerebral palsy to ever land a regular role on a primetime series when she was cast as Blair’s cousin Geri. She was spotted by Norman Lear while performing at the Media Access Awards. “That particular night, Norman was in the audience. I got a standing ovation, and I ran into Norman in the elevator. He said, ‘You’ll be hearing from me really soon, kid.’ Three months later, he called me with the cousin Geri episode, and I filmed it two weeks before Christmas that year.”

4. Tootie’s roller skates were to make her taller

Tootie spent a lot of time in her trademark roller skates, but it wasn’t just a character choice. They actually put actress Kim Fields in those because she was so short. Interestingly, she lost out to a role on Diff’rent Strokes because she was too tall for the scenes with Gary Coleman. Bonus trivia: What was Tootie’s real name? Answer: Dorothy Ramsey.

5. Mindy Cohn was not an actress

Mindy Cohn’s role of spunky Natalie was created just for her, even though she was not an actress. During some research for the show, the producers went to an all-girls school to talk to students where they met Mindy…and decided that they wanted her to be in the show. Talk about luck. She has since gone on to be the voice of Velma in various Scooby-Doo productions.

Not only did many of the guest stars on the show go on to become famous actors, a few of them went on to become Oscar winners. Helen Hunt, George Clooney, Grant Heslov, and writer producer Paul Haggis all had their part in the show. Other future stars that made an appearance include David Spade, Richard Grieco, Juliette Lewis, Jami Gertz, Penelope Ann Miller, Doug Savant, Seth Green, and Mayim Bialik.

In the season 7 episode “The Reunion” Lisa Whelchel (who played rich girl Blair) and George Clooney’s character shared a kiss…that she doesn’t remember. She has watched the clip on YouTube and said: “I am all for repressed memories, but why I repressed that one I don’t know!”

8. There was a lot of pressure about weight

Like many teenagers, the cast members had some weight fluctuations while they were on the show. In fact, Joan Rivers used to rudely call the show “The Fats of Life.” Mindy Cohn was encouraged not to lose weight since it fit her character, but Lisa Whelchel has said the producers “hired nutritionists, therapists, and hypnotists. The sent me to fat farms, exercise trainers, and health spas. They even brought the scale to the rehearsal hall and had me weigh in every morning, while everyone gathered around to see if I had gained or lost any weight.”

9. The character Jo was based on the Fonz

Nancy McKeon, who joined the cast in season 2, has said that her tough-girl character Jo Polniaczek was originally molded after the Fonz. “Jo originally was a lot like the Fonz; then they wanted to take away some of her dominance, which I didn’t want to do. So we talked about it, and came up with the way she is now. She’s not the Fonz, she’s not a wimp; she stands out alone.”

Eve Plumb appeared in two episodes as Blair’s sister. In one scene, they were supposed to scuffle, and the former Brady Bunch-er punched Lisa Whelchel in the face a little harder than anticipated. For a joke, Lisa had the makeup department give her a black eye and they kept up the pretense for a few hours.

11. Lucille Ball saw herself in characters on the show

Lucille Ball once ran into Mindy Cohn at a restaurant and said to her: “You and that Tootie remind me of me and Viv. You are a very funny lady, Ms. Cohn. You keep this up now, ‘cuz you have a lot to offer.” Compliments don’t get much better than that.

12. Some of the actresses later got auditions on Friends

Nancy McKeon later read for the part of Monica on Friends but of course lost out to Courteney Cox. Lisa Whelchel was asked to read for Rachel…but she thought the show was too sexual and turned down the opportunity despite loving the script and knowing that it would be a hit.

Lisa, a strict Christian, actually declined a storyline where her character would lose her virginity, and refused to be on the episode when Natalie eventually did (remember Snake?). “Parental guidance is so loose these days. A lot of young girls get their lessons on life and discipline from TV. I don’t believe in premarital sex, and I don’t want to condone it to any young person who’s watching.”

Charlotte Rae eventually got tired playing her role as housemother Mrs. Garrett, but she suggested that her good friend Cloris Leachman join the cast in her place in season 8. She did, as Edna Garrett’s sister Beverly Ann and the new co-owner of the Over Our Heads gift shop.

15. At the time it was the longest running sitcom on NBC

When the show ended in 1988 it was the longest running sitcom in the history of NBC, airing 201 episodes and three TV movies.

The final episode had Blair Warner buying the Eastland school, and there were plans to spin the show off with her as the new housemother at the helm, guiding a new generation of students through the facts of life. However, it wasn’t picked up. There were six attempted spin-offs throughout the show’s run, but none of them took.