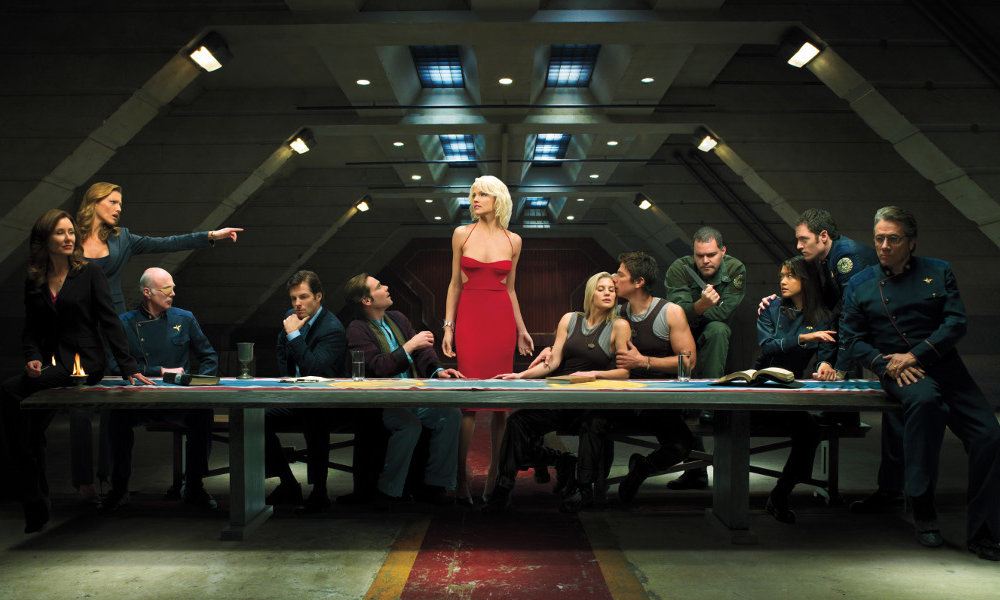 2. The Role of President Laura Roslin Was Written Specifically With Mary McDonnell in Mind

3. Unlike the Human Ships, the Cylons Were Completely Redesigned for the Original Series

4. The Telephone on the Bridge of the Galactica is Actual Standard Army Issue; the Field Telephone Has Been in Use Since the Korean War

5. After She Turned Down the Role of Ellen Tigh Because She Thought It Wasn’t Right For Her, The Writers Were So Desperate to Work With Lucy Lawless That They Wrote D’Anna Biers Specifically With Her in Mind

6. The Theme Music From ‘The Deer Hunter’ Can Be Heard Intermittently Throughout the Series

7. Moore and Eick Had to Openly Plea to British Fans to Stop Making the Series Available Through Downloads

Since the series originally aired in the UK before it crossed over to America, British fans of the show were sharing episodes online. The showrunners were terrified the show’s ratings would suffer as a result.

8. Before it Was Accepted By Michelle Forbes, the Role of Admiral Helena Cain Was Offered to Jane Seymour Who Turned it Down

10. The Battlestar Pegasus is Actually the Same Set That Would Have Been Used for a ‘Lost in Space’ Reboot Had the Series Been Picked Up

11. In His Cabin, Adama Has an IKEA Shaving Mirror; the Model is Called the “Fräck”

12. The Marine’s Combat Helmets Are Actually Snowboard Helmets; They’re Made of Plastic

13. What IS Real, However, Are Most of the Series’ Guns

Battlestar opted to use real world modern day weapons for a lot of the action instead of futuristic props. It was a cost-cutting measure (that totally worked).

14. Cavill’s Decision to Commit Suicide in the Series Finale Was Suggested By Actor Dean Stockwell Who Thought It Played Better For His Character

15. Harrison Ford, Sam Shepard, and Ed Harris Were All Considered to Play Adama Before it Was Awarded to Edward James Olmos

16. When He Got the Part, Olmos Actually Had a Clause Included in His Contract That ‘Battlestar’ Would Never Have an Alien or Monster on the Show

The idea was to keep the show focused on human drama.

17. Adama’s Lighter Was Bought at a Garage Sale

18. President Roslin’s Swearing-In Ceremony Was Deliberately Modeled After the Most Famous Image of Lyndon Johnson’s Swearing In Just After Kennedy Was Assassinated

19. The Rounded Edges of the Series’ Paper is Supposedly a Reference to the Series’ Creators Joke That He’d ‘Cut Corners’ To Make the Series Work Without a Hollywood-Style Budget

20. Grace Park, Who Played Boomer, Was Originally Recommended to Audition For the Role of Starbuck

21. Paul Campbell Was Only Killed Off Because the Actor Refused to Take a 5-Year Contract

The reticence made showrunners nervous that the actor would leave the series before his character arc was completed. Rather than fret, they just murdered him.

22. Only Fours Ships Appear in the Remake That Aren’t in the Original

The President’s ship, Cloud 9, the ringed passenger ship, and the Olympic Carrier.

23. The Term ‘Skinjob’ Is a Reference to 1982’s ‘Blade Runner’ in Which the Humanoid Replicants are Also Referred To By the Same Slang Term

24. ‘So Say We All,’ the Official Ceremonial Closing Used Throughout the Series Was Actually Improvised By Edward James Olmos in the Mini Series

25. Starbuck Was Originally Played By a Dude in the Original Series

Too bad no one is tougher than Katee Sackoff. No one.

26. And, Actually, the Original Starbuck, Dirk Benedict, Outright Refused to Participate in the Revival

27. Meanwhile, Original Series Actor Richard Hatch Was Happy to Play a New Character in the Revival

He used to play Apollo, but in the revival he was Tom Zarek.

28. At the End of One Episode, Olmos Improvised On Set and Ended Up Breaking a Model Ship … Though the Actor Thought the Ship Was a Set Prop, It Was Actually an Extremely Valuable Historical Item On Loan From a Nearby Museum

It was the most expensive scene in the show’s history.

29. Costume Designer Deborah Everton Had Her Characters Dress Like They Were in a Western When Off-Duty to Help the Audience Relate to Them Easier

30. The Show Was So Highly Valued In Its Time That the United Nations Held a Special Symposium to Discuss the Show’s Themes of Race, Gender, Sexuality, and Religion

31. ‘Two and a Half Men’ Star John Cryer Auditioned to Play Baltar

32. Whoopi Goldberg is a Public (and Nerdy) Fan of the Show

The plan was to reach Earth, thousands of years before modern times. Of course, those who watched the show know that plan was carried off without a hitch. Okay, there were lots of hitches. But they still got there.