The 15 Hottest Robots In Film and TV History

22 Parents Who Need to Stop and Rethink Their Choices

Meet Gallest, a Rapper Who Just Happens to Be Rihanna’s Little Brother

22 Parents Who Need to Stop and Rethink Their Choices

Meet Gallest, a Rapper Who Just Happens to Be Rihanna’s Little Brother 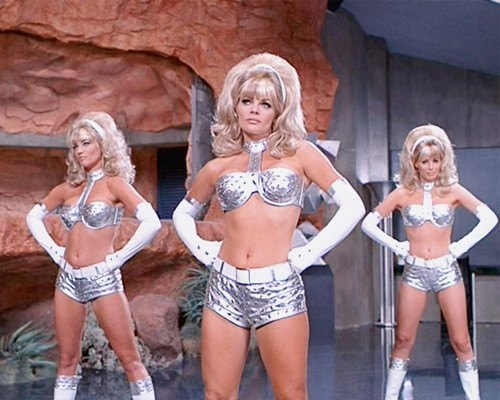 What is life? When does a thing stop being artificial and start simply being? More importantly, when is it okay to find a metal and plastic construct super attractive? Hollywood has toying with these heady ideas for decades, creating robots that question the very nature of existence, and the very nature of ‘hotness’. The overwhelming answer to both questions seems to be that both life and a killer bod can spring from anywhere, even the most inanimate of starting points. Here, for your consideration, are 15 of the hottest robots in TV and movie history.

Not only is Ex Machina one of the best films released this year, it also features a powerful performance from one hot ‘bot. That is, Alicia Vikander embodies the sultry Ava, a burgeoning A.I. experimenting with an urge for freedom. The entire film is incredibly well done, with fine performances from Oscar Isaac and Domhnall Gleeson (both of whom can be seen in prominent roles in The Force Awakens), but it’s Vikander’s captivating Ava that really steals the show.

In a film where all the robots seem to be striving to become more human, Daryl Hannah’s Pris is headed the opposite direction. A “basic pleasure model,” Pris finds herself used for her built-in charm and skills with manipulation throughout the film. While her boyfriend, Roy Batty (another robot), genuinely cares for her, Pris seems to get farther and farther away from her goal as the film goes on.

3. All of ‘The Stepford Wives’

What more could any man ask for than a vacant, unquestioning partner for the rest of their life? That’s the question asked by The Stepford Wives, the twice filmed story of a small town whose men are secretly replacing their wives with robotic doubles who love to clean, cook, and please their man. Regardless of which version you look to, however, both versions of the story are packed with blonde Barbies who are certainly fun to look at, even if they are a little vacant.

Speaking of vacant, the Fembots make the Stepford Wives look like free-thinking rebels. These scantily clad ‘bots are the go-go boot wearing assassins who almost manage to take down Austin Powers himself in the final moments of the first film. It’s a good thing Powers’ pledged monogamy to Elizabeth Hurley, otherwise these femme fatales may have gotten the better of him. Too bad about her not being human, either, though …

What can we say, power is sexy. Sure, the Virtual Interactive Kinetic Intelligence (or V.I.K.I.) may not have a body, but she’s got a plan and the tools to carry it out. She’s also got a lovely alto that coos threats in the most calm and reassuring way possible. Just remember, she doesn’t want to kill humanity, she just wants to keep it safe … even if that means killing humanity. What about that logic isn’t a turn on?

In the future, robots will be prostitutes. At least, that’s what the majority of dark sci-fi visions believe, that as soon as man has the technology, we’ll start trying to build new places to stick it (which may be more accurate than we want to believe …). At any rate, you can bet that when it comes time to draft a male version of a pleasure machine, it’ll probably look fairly similar to Gigolo Joe, Jude Law’s robot streetwalker with a heart of gold in Steven Spielberg’s A.I.

Yes, before she became famous, Angelina Jolie played a cybernetic organism in Cyborg 2. And yes, she was very, very hot in it. However, we’re going to have to give the series win to Dayle Haddon, the original cyborg who was shepherded to Atlanta by an up-and-coming Jean Claude van Damme. Is the movie good? Depends on your threshold for cheese and your enjoyment of van Damme making crazy eyes. Quality aside, though, the chance to ogle Haddon’s cyborg is definitely worth the ride.

Does Lisa really count as a robot? There’s no real skeleton, no wires or other machinery. Except for being produced through some proto-Internet mumbo jumbo, she almost seems more magic than science. And yet, Kelly LeBrock, the pouty actress who plays Lisa also seems to be made up more of magic than anything else, so when you get to watch the sultry brunette traipse across the screen in a mid-riff sweatshirt, should the semantical argument “is she really a robot?” actually apply?

Played with aplomb by the inimitable Summer Glau, Cameron is a reformed terminator who’s trying to learn the ropes of humanity. Glau brings a surprising amount of depth to the role (even more astonishing considering how shallow the show is overall), which only adds to actresses’ natural charm and ample amount of God-given gifts.

Michael Fassbender playing a robot. Need we say more? Ugh, fine then … sure, Prometheus may have been semi-inscrutable depending on who you talk to (like everyone), but Fassbender never delivers less than his A-game, and his performance transcended the film’s densely-packed mediocrity. Of course, outside of his technical skill, nary a complaint was heard at having to spend a few hours gawking at the handsomest robot ever made.

Just as the show seemed to be losing creative steam, Star Trek: Voyager injected a little sex into the proceedings, and a star was born. That star was Jeri Ryan, who played Seven of Nine, a former member of the Borg collective who joined Voyager in season four. She quickly began to usurp the attention (through little fault of her own), coming to dominate storylines as the show continued. In spite of her rather scant screen time in the grand scheme of the Star Trek universe, Seven of Nine holds the top spot in the series’ extensive list of hot chicks.

We have to throw in another terminator, folks. Sorry, they just build lady robots hot in the future. This honor goes to T3’s T-X, played by Kristanna Loken. She may not be the most talented of actresses, but all you really need to play a movie terminator is a decent enough intense stare. Loken has that and the body to match. It’s also a ton of fun watching the 100 pound vixen toss Schwarzenegger’s Terminator around like a rag doll.

If you like your sex symbols sleek, silent, and deadly, then look no further than Gort, one of science fiction’s first monsters and one of it’s most enduring sex symbols. This study hunk of metal doesn’t feel the need for clothes, communications or genitals. He’s a one-man army who follows orders and extinguishes his prey with the most unrelenting of hotness. “Klaatu barada nikto,” may as well translate to, “Your place or mine?”

You don’t need to be humanoid (or speak intelligibly) to be sexy. Case in point: intrepid trash can on wheels R2-D2. The bleeping, blooping hero of the Star Wars universe, R2-D2’s allure is all in his personality, his indomitable spirit, and his irrepressible sass. You may not have a clue what he’s shouting at C-3PO, but you can bet it’s either extremely clever or beautifully angsty (however it is you see the little robot). One thing is for sure, this is a bot with a style all his own.

She’s sweet and helpful, but she’s also entirely her own robot. The Jetson’s maid, Rosie, may have been crafted a little zoftig, but she knew how to make her curves (and her wheels) work for her. There was something about Rosie that said at any moment she would be ready and willing to take of every one of your needs, no matter what it was. Maybe that was just us …