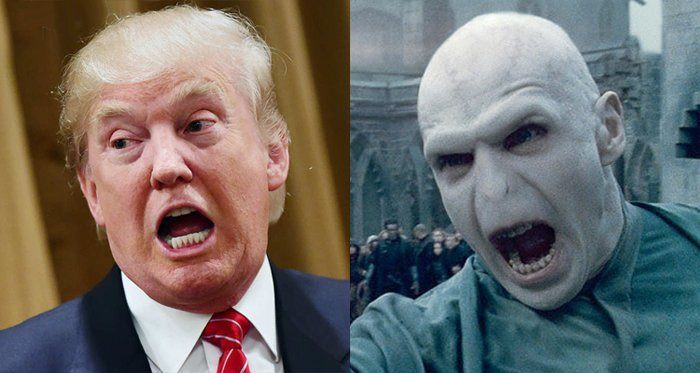 Harry Potter author J.K. Rowling has never been afraid to speak her mind, especially when it comes to politics. The outspoken author who has previously made headlines offering her opinion on a variety of political topics has now turned her attention to the American presidential election and Republican frontrunner Donald Trump. Yesterday, Rowling took to Twitter (her social platform of choice) and compared the ginger-haired blowhard to the king of all evil, Harry Potter’s nemesis Lord Voldemort:

How horrible. Voldemort was nowhere near as bad. https://t.co/hFO0XmOpPH

But why oh why would the British author have such nasty things to say about … I can’t even keep that going. If there’s any presidential candidate who’s more deserving of scorn, please point them out. Trump is the man who insinuated that most Mexican immigrants were criminals (and worse). He’s the guy who recently said that all American Muslims should be registered and/or outright banned from the country. Just this morning, Trump dropped this pouty tweet in response to TIME Magazine’s decision to anoint German Chancellor Angela Merkel Person of the Year:

Very presidential, guy. It took several months of the billionaire’s inflammatory statements, but the suggestion that Muslims be deported finally opened the Internet’s eyes to Trump’s literary counterpart. And thus, the hashtag #Voldetrump was born. Here are some of the tweets that have been circulating on this theme:

My theory is that Trump is Voldemort & if the media stops saying his name, Harry Potter will come destroy him. America will be great again.

The only way to stop Donald Trump is to destroy his Horcruxes. The wig is definitely one. If you need me I'll be finding the other six.

Now, we can only bow our heads and hope against hope that Voldetrump has some kind of Harry Potter waiting in the wings to vanquish him. Because that guy can’t show up soon enough.