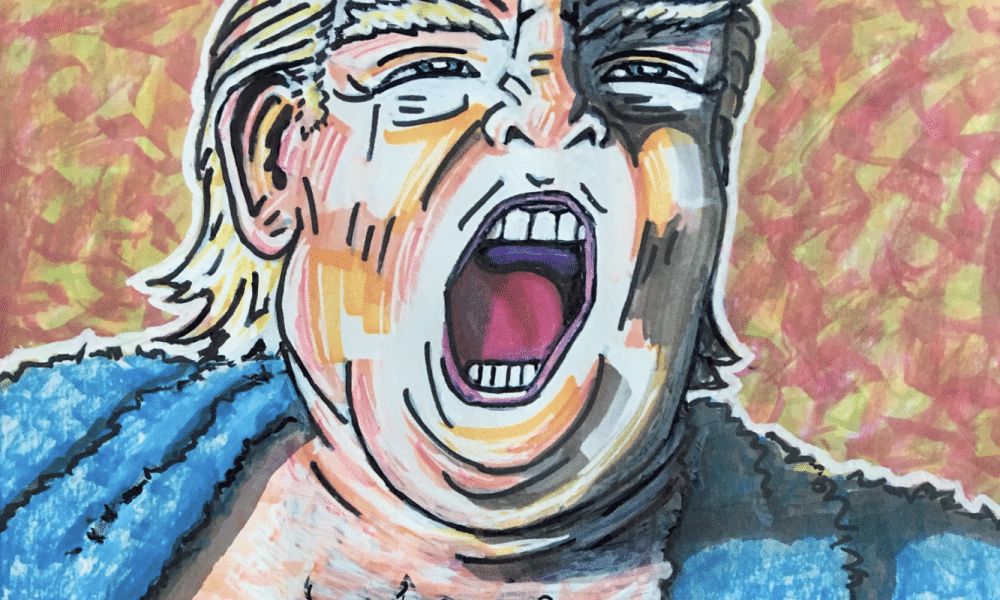 Over the last four years, comedian Jim Carrey has been very selective about his work. After Dumb and Dumber To, the famed actor has largely withdrawn from film, only appearing in a handful of small parts in indie movies (anybody check out The Bad Batch? No?). In spite of the fact that Carrey has taken a little break from the comedy scene, he’s still channeled his talent into a variety of creative endeavors, most notably his painting.

The actor has taken to posting politically-charged paintings on his Twitter feed (https://twitter.com/JimCarrey). For the most part, the actor’s contribution to the art world has gone largely unspoken. Until March 17, when a portrait of White House Press Secretary Sarah Huckabee Sanders drew international headlines.

This is the portrait of a so-called Christian whose only purpose in life is to lie for the wicked. Monstrous! pic.twitter.com/MeYLTy1pqb

Even as the Republican Party rushed to excoriate the comedian, Carrey remained stalwart. Two days later, on March 19, the Carrey published a new painting.

If you liked my last cartoon you may also enjoy…

"THE WICKED WITCH OF THE WEST WING AND PUTIN’S FLYING MONKEYS“ pic.twitter.com/slBG7j1s8d

Since then, Carrey has tweeted a new painting every day or two, each one focusing on a humiliating portrait of a Trump administration official.

Carrey’s response to the Stormy Daniels appearance on 60 Minutes:

Did anyone watch 60 minutes last night? Hell of a piece about a poor kid from Greece named Giannis Antetokounmpo who’s making it big in the NBA. America still has some magic. Pity you have to wade through so much cultural sewage to find it. ;^} pic.twitter.com/H4BTPcw8bu

They're saying the NRA took Russian money to support the Republican party in the last election. Maybe that's why Trump and his flying monkeys are so accommodating? Is Wayne LaPierre also Putin’s stooge — or just another run of the mill demon from hell? #BanTheNRA pic.twitter.com/7r0J9NP2ng

And — as of March 29 — there was Carrey’s official submission to the Smithsonian Art Gallery.

Dear Smithsonian National Portrait Gallery @NPG, I know it’s early but I’d like to submit this as the official portrait of our 45th President, Donald J. Trump. It’s called, 'You Scream. I Scream. Will We Ever Stop Screaming?' pic.twitter.com/LrCmlXXpv7

These portraits may not be tasteful, but they’re undeniably hilarious provided you’re not one of those silly people who believes that Trump and his cronies deserve respect.

Jim Carrey has long been public about his staunch political beliefs — he disowned his performance in 2013’s Kick Ass 2 because of the excessive violence — so, his Trump-themed extra-curricular activities should come as little surprise. What is surprising is the right’s continued propensity to get sucked into these battles again and again. Of course, that’s the other half of the fun, isn’t it?