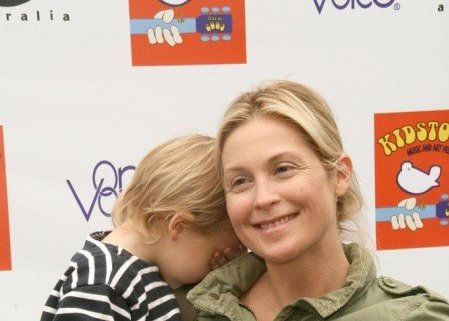 Forty-six year old Kelly Rutherford is best known for her work on popular soaps like Generations and Melrose Place, as well the primetime CW series Gossip Girl. But for the last seven years she’s been making headlines for her very public custody battle with ex-husband, German businessman Daniel Giersch.

Giersch and Rutherford, who married in 2006 and divorced shortly after in December 2008, have two children together, son Hermés and daughter Helena, who was born after their separation.

The couple became involved in a child custody dispute over their son and unborn child in early 2009. In August 2009, Rutherford and Giersch reached a temporary settlement of joint legal and physical custody, until April 2010.

Then in 2012, Giersch’s American visa was revoked after Rutherford’s lawyer informed the State Department about issues pertaining to Giersch’s businesses, with allegations that involved fraud and drugs and weapons trading in South America. Giersch became unable to enter the U.S., and took up residence in France and Monaco.

Rutherford and Giersch’s children spent the summer of 2012 in France with their father. Rutherford asked the court to grant her sole custody so that she could keep the children primarily in the United States following their visit to France.

But in August 2012, a California Superior Court judge ruled that the 50/50 custody arrangement should remain. The judge also stated that because Giersch is unable to travel to the U.S., the children should live in France with him and attend school there, with Rutherford traveling there to visit them.

Rutherford appealed the decision, but her request was denied. Then, in June 2013 the actress filed for bankruptcy claiming that she had spent $1.5 million on legal fees relating to the divorce and custody dispute.

In May 2015, Rutherford was granted temporary sole custody of her children for the summer. On July 23, 2015, a California judge ruled that California did not have jurisdiction over Rutherford’s child custody case because she resides in New York, and her ex-husband was again awarded custody.

Rutherford appeared in New York Supreme Court yesterday, where her children were seized and immediately forced to leave the United States and fly back to Monaco to be with their father, because she had refused to fly them back to Europe herself.

Rutherford responded to the judge’s ruling saying, “What the judge did yesterday was shocking, illegal, and abusive to my children. Without any legal authority, a judge from the lowest ranking court in the state court system violated the highest ranking deferral constitutional rights of my American citizen children.”