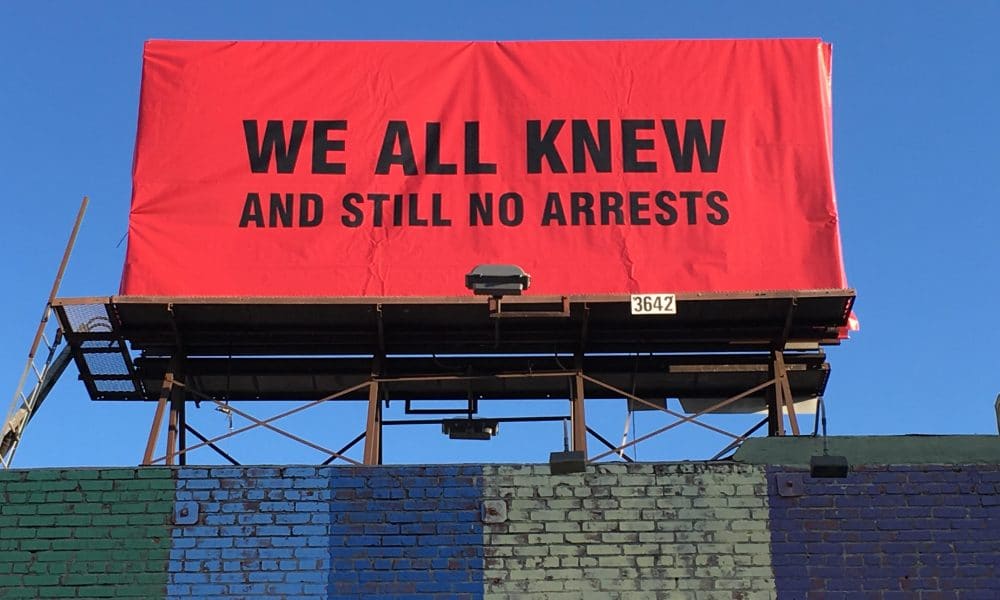 The billboards read, respectively: “And the Oscar for biggest pedophile goes to…”, “We all knew and still no arrests,” and “Name names on stage or shut the hell up!”

This isn’t the first time that Sabo has used his conservative art to grab headlines. The artist has been at work for the last fifteen years, ever since — as his website declares — “Bush the Younger was elected President and the claws came out in Hollywood.”

Since then, Sabo has worked double time to fight back against the leftist Hollywood machine by, well, aping the designs of better artists in an attempt to push across some crude, partially realized point. In addition to his most recent efforts, Sabo has also reworked benches to read, “Republicans are the New Punk,” released photoshopped pictures of a naked and tattooed Hillary Clinton and Bernie Sanders, and a whole host of other unsavory things that are creatively on par with Kathy Griffin holding up Trump’s severed head.

Oh, and this dillhole divides the topics on his site into Gay, Blacks, Muslim, and Burka.

Easily the most unsavory part of this installation piece is the knowledge that Mr. Sabo is getting these ideas funded. Conservatives around the country are seeing his work, nodding, and going, “Now, there’s a patriot with a purpose.” It’d be much more reprehensible if there weren’t similarly tasteless displays coming from the left, as well.