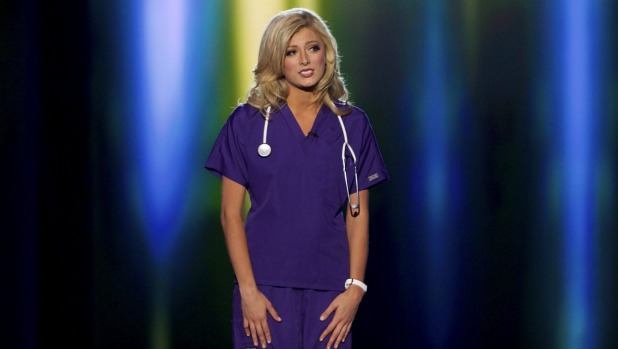 Kelley Johnson who represented Colorado at Sunday night’s Miss America Pageant, was recently invited to Ellen to defend the nurse monologue she recited during the competition’s talent portion.

Johnson, the valedictorian of her nursing school class, had received backlash from the women of The View for the monologue she read.

Comedian and co-host Michelle Collins said, “She came in in a nurse’s uniform, and basically read her emails out loud.” While Joy Behar chimed in saying, “Why does she have a doctor’s stethoscope on?”

Nurses and other health care professionals sounded off after the show, using the #NursesUnite hashtag on Twitter. One user tweeted, @TheView this is only PART of my team, saving lives, 24/7 and 365. Shame on you all! You don’t do crap! #nursesunite.

Although, The View co-hosts happily mocked Johnson Monday morning, on Wednesday they returned to apologize for their brash comments.

Collins said, “I, for all of us, want to say we love nurses. Nurses, if you’re watching, we adore you, we respect you. I was not talking about her as a nurse, and we were talking about the talent competition and it got misconstrued.” Behar confessed, “I didn’t know what the hell I was talking about.”

Johnson had earned extra points with DeGeneres Sunday night when she said that the talk show host should be featured on the $10 bill. She was invited to Ellen’s show Thursday to defend her monologue and discuss her upcoming plans as Miss Colorado.

When Ellen applauded Johnson for choosing such an inspiring monologue, she said, “Thank you. I really do care a lot. It was just so much fun to perform that. To see it trend on Facebook and Twitter, especially to bring all these nurses together and have everybody standing up for our profession and giving them the voice that they deserve — they work so hard and they are life savers — that’s all the message I wanted to give. It’s about them; it’s not about me.”

What did you think about Miss Colorado’s nurse monologue? Sound off in the comments section below.