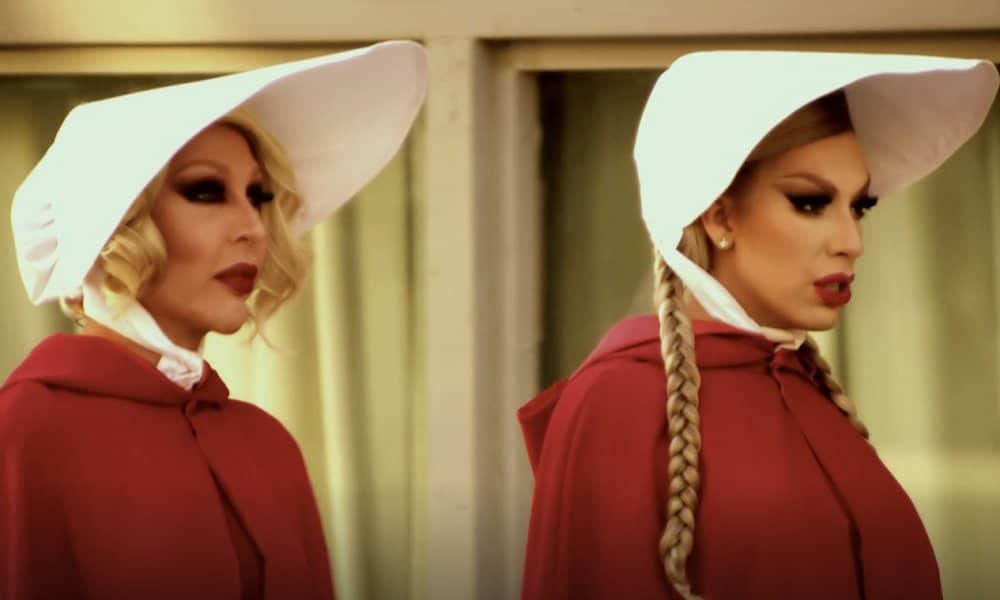 “Hey, kitty girl. Blessed weather we’re having today,” Michaels, winner of the first season of RuPaul’s Drag Race All Stars, comments to season 2 champion Alaska as they sulk down the sidewalk.

“Indeed. Can you believe it’s already All Stars 3? Do you think there will be lots of twists, turns, shocks, and surprises this season?” Alaska asks.

“Chad, the Drag Race Hall of Fame really isn’t what I thought it was going to be,” Alaska says as emergency sirens sound around them. “You look really nice in red, though. It’s your color.”

The hilarious take on The Handmaid’s Tale isn’t the only delicious morsel of content VH1 released in anticipation of the new All Stars season. In the week leading up to the premiere of All Stars 3, showrunners have ru-vealed a slew of information about the upcoming season, including all of the guest judges who will join RuPaul, Michelle Visage, Carson Kressley, and Ross Matthews. The list includes Adam Lambert, Kristin Chenoweth, Nancy Pelosi, Garcelle Beauvais, Jeffrey Bowyer-Chapman, Emma Bunton, Tituss Burgess, Nicole Byer, Chris Colfer, Todrick Hall, Vanessa Hudgens, Marc Jacobs, Shay Mitchell, Vanessa Williams, and Constance Zimmer.

Fans also got a glimpse into the outfits each competing queen wore upon her first entrance into the workroom for the upcoming season of All Stars.

The 90-minute premiere of RuPaul’s Drag Race All Stars 3 airs on Thursday, January 25 at 8 PM EST on VH1.