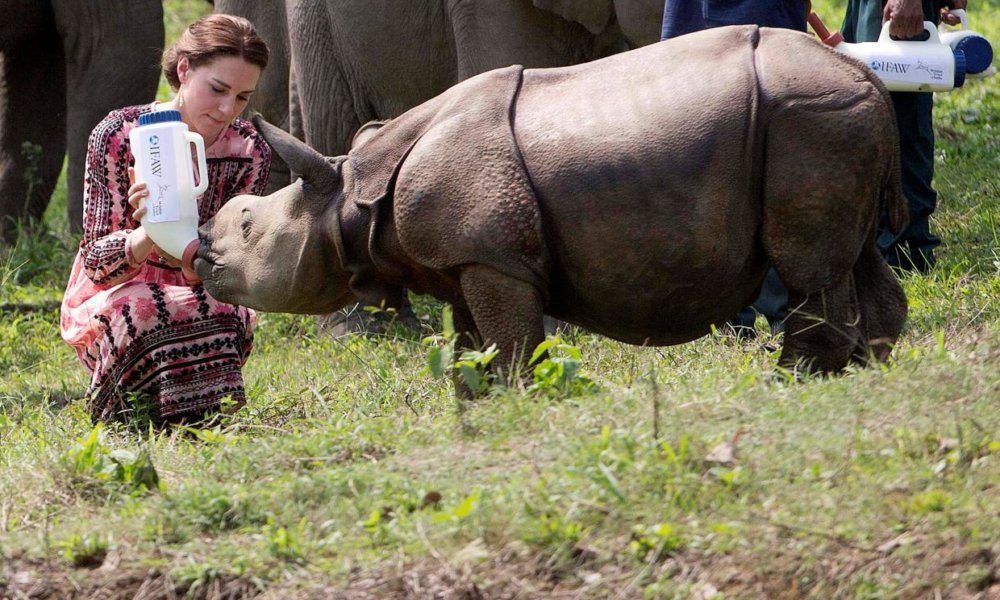 The Duke and Duchess of Cambridge visited India’s Kaziranga national park this week where they were on a visit highlighting conservation, but just hours after they finished their visit a male rhino was shot dead by poachers in the park. The rhino’s horn had been removed to presumably be sold on the black market.

Kaziranga is home to over 2,400 rhinos and poaching has become a growing issue in the area. There have reportedly been six rhinos killed within the park already this year, one of which occurred just three days before William and Kate arrived. The high-profile couple helped bottle feed rhino calves on their visit, and William was reportedly appalled when shown footage of the earlier poaching remains.

After this most recent killing there were as many as 105 empty cartridges from AK-47’s found. According to the Kaziranga divisional forest officer Subhashis Das:

“Our forest guards who rushed to the spot on hearing gunshots were engaged in an exchange of fire with the poachers, but the culprits managed to escape under the cover of darkness.”

According to a spokesperson from Kensington Palace:

“The Duke and Duchess were angry to hear about the killing of this rhino during their visit. They hope their time in Kaziranga encourages others to support the brave rangers that are protecting animals that are so important to the communities that surround the national park.”

William and Kate are currently on a seven day tour of India and Bhutan. Most recently the couple took a three hour hike in the Himalayas to visit the 17th century monastery which is currently named Bhutan’s Tiger Nest (formerly Paro Taktsang). The site of the monastery is thought to be extremely holy by the Bhutanese.

The two were following in the footsteps of the Prince of Wales who only made it halfway up to the monastery on his trip.

Before returning to the UK on Sunday the royal couple will fly back to India to visit the Taj Mahal in Agra.