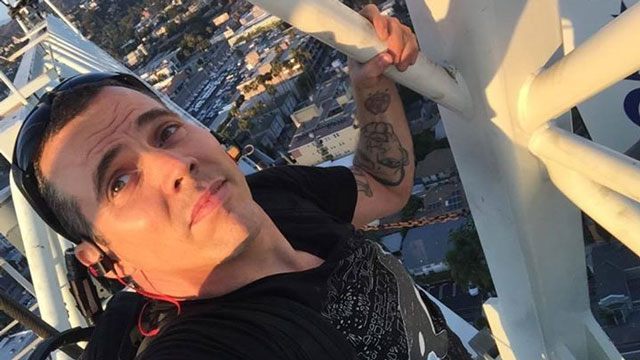 One of MTV’s favorite “jackasses” will be spending some time behind bars following an outrageous SeaWorld prank.

Back in August, Steve-O made headlines when he climbed on top of a construction crane. Once the daredevil reached his destination at the top of the crane, overlooking Hollywood from around 100 feet in the sky, he inflated a plastic whale which had the words “SeaWorld Sucks” written on the side in duct tape.

Today, the reality star shared that he has been sentenced to 30 days in prison for the stunt he pulled, which he says was all in the name of protesting SeaWorld’s alleged animal abuse.

The 41-year-old opened up about the sentencing on Instagram:

“Considering I’ve become a clean and sober, dog-rescuing vegan, I must say I’m ready to go to jail– not just because it will bring so much attention to the plight of orcas in captivity, but because it’s nice to let people know I haven’t lost my edge. What can I say, I’m a jackass.”

But it’s no surprise that the former Jackass star is going to jail. He was charged with five different misdemeanors because police mistook his grand gesture for “a suicidal man prepared to jump.”

In the end Steve-O believes his stunt was for a good cause, because it will shed more light on the issue at hand – animal cruelty. He explained, “My whole crane-climbing, fireworks debacle really turned out to be pretty meaningful in the end, too. I mean, if your goal is to make a statement about captivity, you may as well get yourself locked up!”

What do you think of Steve-O’s crazy SeaWorld stunt? Does he deserve to spend time behind bars for climbing the crane and protesting for animal rights? Share your thoughts with us in the section below.