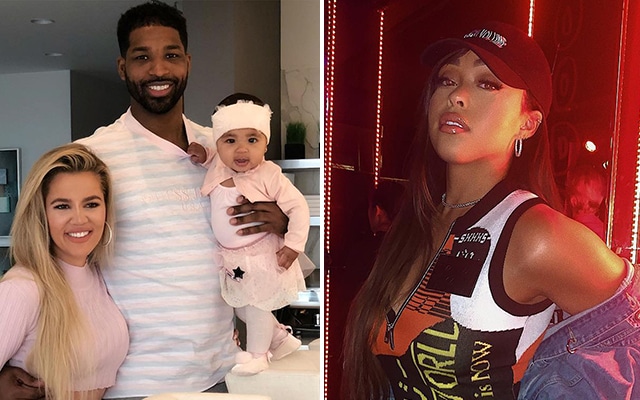 And the plot thickens…

Khloe Kardashian has now officially cut ties with her daughter’s father, Tristan Thompson, after he allegedly cheated with her younger sister’s best friend!

Thompson reportedly flew from Cleveland to Los Angeles last Thursday to spend Valentine’s Day with Khloe and their daughter, True Thompson. Khloe showed off her Valentine’s Day gift from Thompson on her social media accounts, but not everything was as it seemed.

The Cleveland Cavaliers player was caught making out with Kylie’s right-hand woman, Jordyn Woods, on Sunday at a house party in Los Angeles.

Witnesses told TMZ that Tristan and Jordyn were all over each other and even made out. Khloe allegedly found out Monday and immediately broke things off with the NBA player for good.

Many celebrities have been quick to comment on the story:

Modern Family star Sarah Hyland tweeted, “Seems like Khloe is finally out of the Woods… that was too soon. I apologize.”

“Bachelor” alum Amanda Stanton have tweeted in response, “I’m so upset about Jordyn, I can’t sleep over it. Like she was close with baby True!!!!! HOW COULD YOU?!”

Thompson himself tweeted and deleted as well, simply writing “FAKE NEWS” before erasing his post. He hasn’t said anything else since.