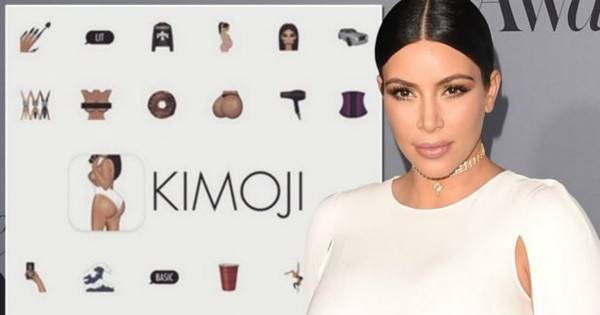 Kim Kardashian has released her own emoji app called “Kimoji” that is now available in the app store. The set of images includes 250 different designs of emoji options relevant to Kim’s life, including things like a waist trainer, her crying face, a phone taking a selfie, her contouring makeup, a Yeezy Boost 350 sneaker, and, of course, a couple versions of her ample butt. There are also a variety of talking bubbles and inexplicably a marijuana leaf.

The set of emojis is available for $1.99 and was released on Monday, but due to the high demand there were a few issues. Yes, it seems as if Kim has broken the internet again! Thousands of users had a hard time downloading the app, and others were having trouble using it once they did. The reviews started pouring in, many of which suggest there are a lot of changes that could be made to make the app more functional.

Kim made sure to keep her fans updated throughout the process of getting things settled.

“We worked so hard on this app & we know there are some issues due to the massive downloads that the whole tech team is so working on.”

The app has reportedly been in the works for two years, and so far there are no other family members featured in the set of images, but that could change at some point. Kim’s husband Kanye West tweeted his pride for the project amidst the trouble with the app store.

I’m so proud of my wife! This KIMOJI idea is so dope… pic.twitter.com/fsWK5FOGTE

The rest of the Kardashian family seems pretty proud as well, as they have been Instagramming screen shots of group texts among themselves where they are taking full advantage of the new emojis in their daily conversations.