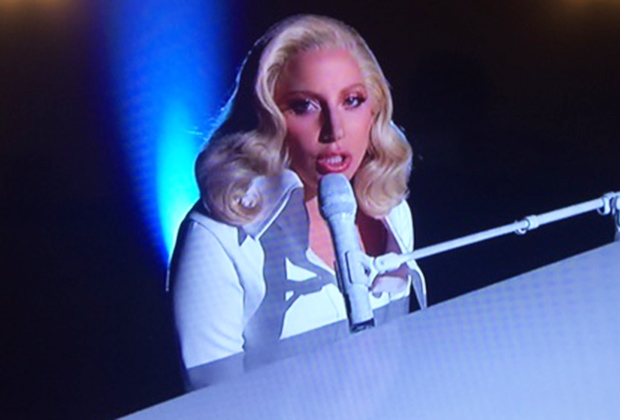 Lady Gaga ended up creating one of the most moving moments of the Academy Awards when she took the stage to perform her Oscar nominated song “Til It Happens to You” from the college rape documentary, The Hunting Ground. The song about sexual assault is personal to the singer, who has been open about her experience of being raped at the age of 19.

Vice President Joe Biden introduced the performance in an effort to bring awareness to campus sexual assault and the website ItsOnUs.org. He said:

“Let’s change the culture. We must, and we can.”

Lady Gaga’s performance itself was very powerful and emotional, and got more moving when she was joined onstage by other real life survivors of sexual assault. The men and women were decorated with writing on their arms that said things like “Survivor,” “Unbreakable” and “Not Your Fault.”

People in the audience were clearly moved, and some were even brought to tears. Other stars took to Twitter to share their appreciation of the moment.

#ItsOnUs
These survivors. Wow.
Floored by the courage. And beauty. And realness. #Oscars @ladygaga Thank you.

thank u @ladygaga and VP @JoeBiden for bringing attention to sexual assault at the oscars. it hit very close to my heart for obvious reasons

Gaga spoke about the opportunity to spread awareness when she was on the red carpet prior to the show.

“It’s such an important song for me. One in 5 women will be raped before they finish college.”

The song did not take home the Oscar win (that honor went to Sam Smith), but Lady Gaga is now the first entertainer to have sung at the Super Bowl, Grammys and the Oscars all within the same year.

After my performance last night I felt a weight lifted. Like I didn't have to hide anymore. #TilItHappensToYou pic.twitter.com/gbEOwUdx2x