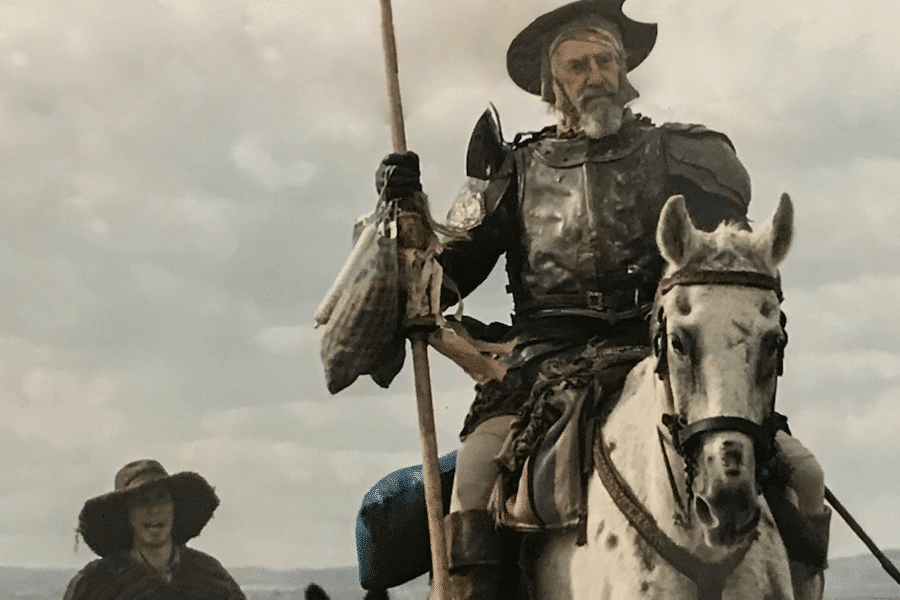 For the last twenty years, Terry Gilliam’s ambitious fantasy film The Man Who Killed Don Quixote has been something of a joke in Hollywood. Today, however, the writer-director is getting the last laugh as the film’s first official screenshot has found its way to the web. The movie is happening, folks, a reality that even Gilliam himself may have once seen as implausible.

The Man Who Killed Don Quixote is a fantasy-themed reimagining of Miguel de Cervantes’ iconic masterwork of Spanish literature, Don Quixote. For his film, Gilliam has injected a little bit of Mark Twain, replacing Quixote’s trusted sidekick Sancho Panza with a fish-out-of-water marketing executive who has been flung back through time.

The photo, released today via Twitter, show’s Jonathan Price as the titular tilter and Adam Driver as marketer Toby Grisoni.

It’s hard to overstate the difficulties that Terry Gilliam has had in bringing his vision of Cervantes’ novel to the screen. The project began in the mid-1990s, as Gilliam sought to inject a little bit of himself into a novel he loved dearly. What’s more, Gilliam hoped to finance the film entirely free of the Hollywood studio system. He secured $40 million for production and landed legendary French actor Jean Rochefort and Johnny Depp for his two leads.

Then disaster struck, three times in a row as filming began in 2000. Days worth of filming were ruined because the shooting location was right next to a Spanish military base, several sets and props were destroyed a few weeks into filming when a flash flood hit, and finally, Rochefort injured himself while riding his horse. The production was so fraught with disaster that a documentary — Lost in La Mancha — was made detailing the film’s troubles and eventual breakdown.

Over the next fifteen years, Gilliam tried and failed to launch several productions of the film, going through a stream of stars and producers. Then, in June of 2017, it was revealed that Gilliam managed to finish shooting The Man Who Killed Don Quixote, almost 17 years after filming began.

Here’s hoping that the result is enough to satisfy Gilliam’s 19-year journey to bring this inventive idea to the screen.